The Allegheny County Council has voted down a bill banning “less lethal weapons” by a vote of 12 to 3. The bill would have prevented the use of weapons like tear gas, flash-bang grenades and rubber bullets by the Allegheny County Police. The bill was introduced in response to the use of tear gas by the Pittsburgh Police against nonviolent, Black Lives Matter demonstrators. There were nine Democrats and three Republicans voting against the ban on “less lethal weapons.” The following testimony was delivered by Chair Jay Walker, Green Party of Allegheny County (GPOAC, www.alleghenygreens.org), at the Allegheny County Council meeting on June 9. Jay Ting Walker is also the Green Party candidate for PA Representative District 23. 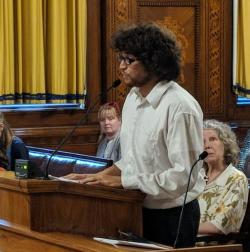 Hi. My name is Jay Ting Walker, and I’m the chair of the Green Party of Allegheny County. I represent the more than 1,000 Green Party members in and around Allegheny County. Our party supports bill number 11516–20 as proposed by Councilpersons Hallam and Bennett. We completely agree that “less lethal devices” are much more dangerous than they are presented. We have seen firsthand the damage done by these devices. In recent weeks Pittsburgh police have utilized these weapons on our fellow residents. Across the country we’ve witnessed these “less than lethal” weapons become lethal weapons, and we refuse to allow that to occur here. Failing to pass this legislation could result in blood on your hands.

We would like the legislation to go further by including a minimum fine and for the charge to be more serious than a summary offense if “less lethal devices” are used. The suggested maximum prison term should be longer, so that use of these horrible and traumatizing methods results in more than just a slap on the wrist. We would also suggest expanding the legislation to include Long Range Acoustic Devices (LRADs) and K-9 units.

On behalf of our members who reside in every single council district in the county, the Green Party of Allegheny County demands that you not only pass this legislation but that you also waive its second reading to protect county residents as soon as possible. Our fellow county residents should not be punished by the police for clearly stating that Black Lives Matter. This is just the tip of the iceberg when it comes to the criminal justice reforms we need. Our society as a whole needs to reduce its emphasis on over-policing and make significant steps towards abolition. Council needs to take that into consideration as our county heads into budget season. We’ll be back.