The following Green Party candidates have been endorsed by the Green Party of Pennsylvania. 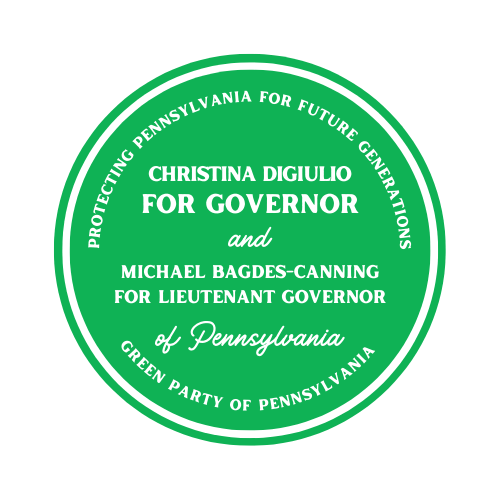 Green Party candidate Christina DiGiulio, who is running for PA Governor, spoke with Philadelphia voters on October 10 at the East Falls Presbyterian Church. . . . DiGiulio explained to the voters why she was “running for governor in an election which I cannot win.” She said that her task is to raise the issues which other candidates avoid, “Candidates from the two corporate parties have no solutions for the many problems faced by the voters. They offer voters a scarcity of new ideas. The Green Party has solutions,” explained DiGiulio, “for climate change and for our healthcare crisis. The Green Party has solutions for corruption in Harrisburg.”

Given her background as a water protector near Marsh Creek State Park, DiGiulio eloquently explained how fracking for fossil fuel is poisoning PA’s air, water and land. “This must stop,” she said. “Just think of our children’s future..." Read more

CENTRE COUNTY, Pa (WTAJ) – Another candidate for lieutenant governor made a stop at State College today. On Monday, Oct. 17, the stop was part of Michael Bagdes-Canning’s “The Trouble with Normal, is it only gets worse” tour. Bagdes-Canning says his campaign is focused on three major issues. Those three issues are building alternatives, climate, and the one most important to himself, corruption... Read more

Richard Weiss is an attorney who has the Green Party nod for Pennsylvania’s U.S. senate seat.  He ran before for attorney general and a judge. He has a number of issues for which he proposes green solutions.

One solution he proposes for the Covid controversy is that “we could have hours of operation for those who want masking”.  Further on, he proposes that we could have “mask-only buses and mask optional buses. . . .”

He believes that we should seek to negotiate peace in the Ukraine and revoke the authorization for use of military force (AUMF) instituted on Sept. 18, 2001 in response to the 9/11 attacks. He wants to reduce overseas bases to pre-911 levels, bring troops home and spend that (my italics) money at home. He supports the Stop Arming Terrorists Bill proposed by Tulsi Gabbard, and wants to free Julian Assange.

This is a winnable PA House race for PA Greens!

Electing a Green to the PA House of Representatives would be a great accomplishment, especially in a competitive state like Pennsylvania. Ballot access laws and corporate “personhood” make the biggest spenders, the most popular candidates, and their corporate and special interests are close behind.

This Fall, PA’s 32 House Districts community have an opportunity to make history. 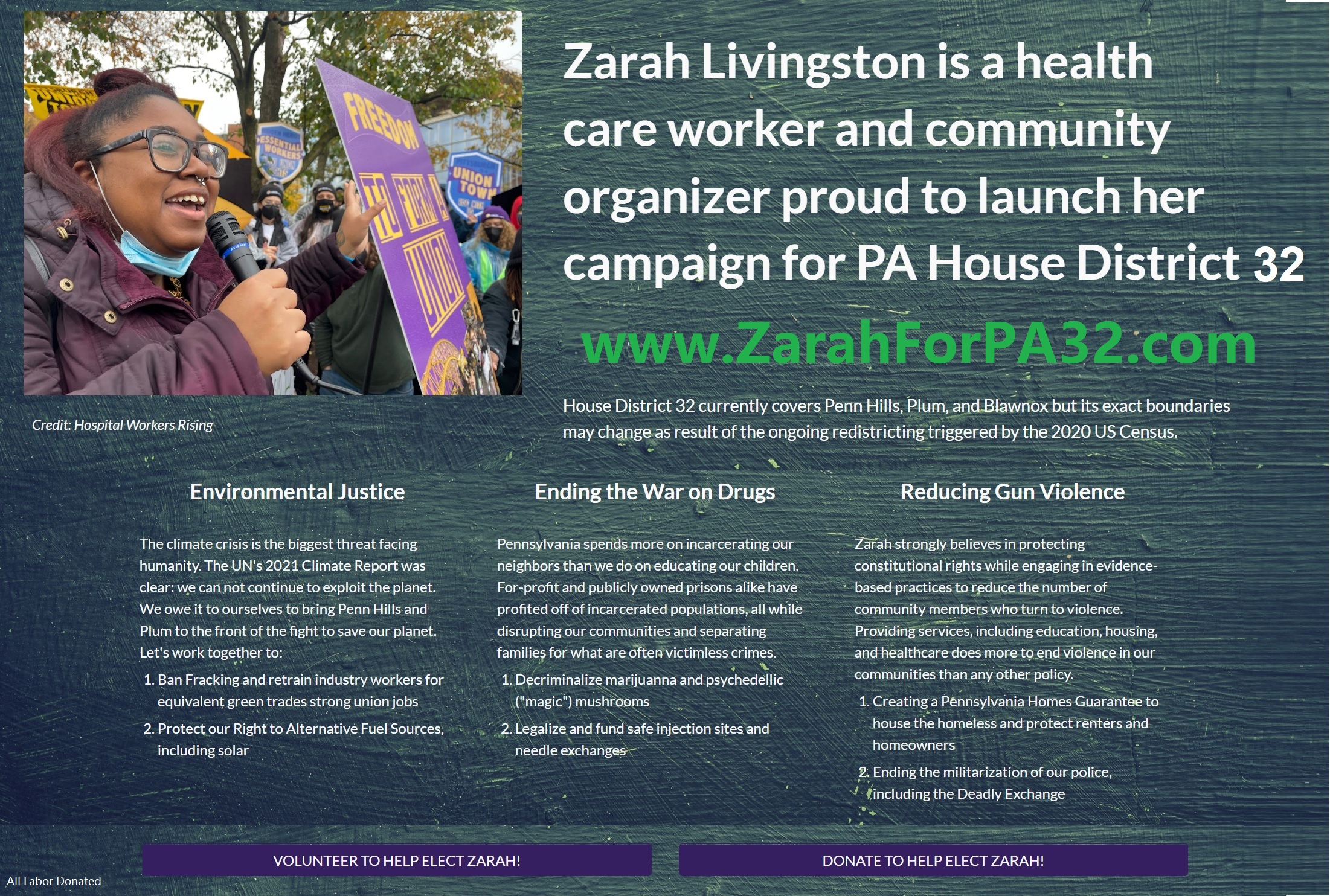 With untimely passing of the Democratic candidate on the ballot  - and no Republican challenger in the race, the community has an opportunity to elect a working class representative to their government.

Zarah’s been working hard to promote her candidacy these last few weeks and we can all kick in to help her concentrated efforts:

Ending the failed “War on Drugs”

We can have our first elected State House Representative in Pennsylvania.

This Campaign needs some quick support for a potential HUGE WIN for Zarah and Greens across PA.

Will you donate a much needed $10, $35 or $100 right now for signs & polling literature? It will be used to help our campaign come out victorious in a few weeks - Help me build a Greener Pennsylvania.

We’re in crisis. Whether it’s the environment that’s currently on fire, the pandemic we’re facing, the racial injustice preying on our citizens, or the unbearable cost of student loans, it’s never been clearer that what we’ve been doing isn’t working. We can’t wait for change. We need action now. 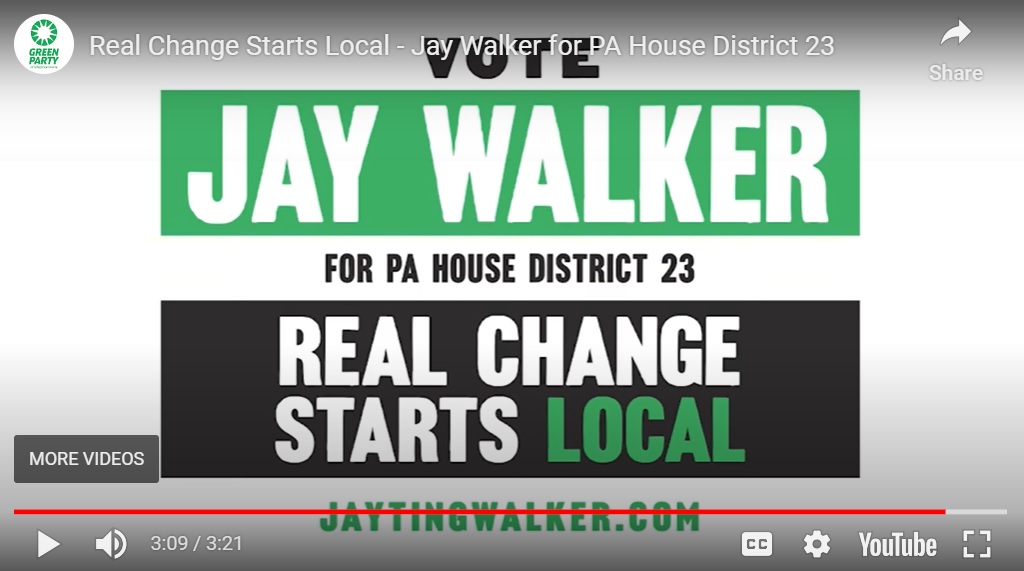 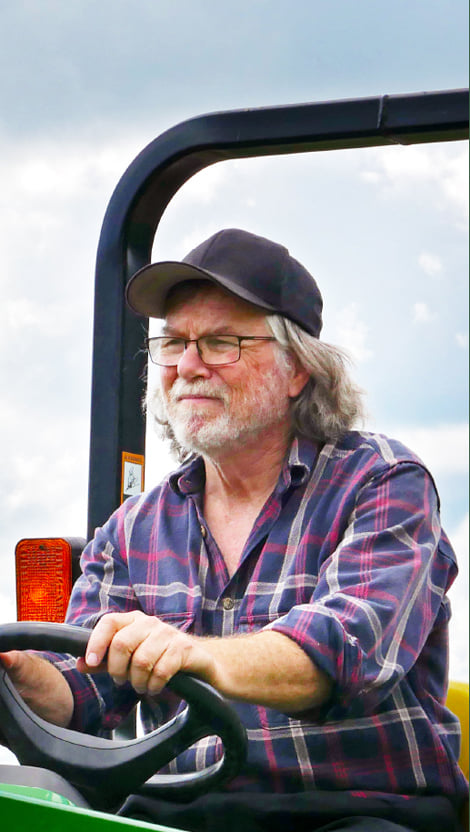 Last year, my local grandchildren, like many other children across PA – and their parents and grandparents -- were introduced to a new concept: remote learning. Obviously, this came with some social costs and a learning curve for all of us. On many days, my two grandkids came to our home, while their parents were at work. It was during these times that it dawned on me that there was something seriously wrong with our internet service.

In our area; we have “high speed internet.” This means that we are served by a copper direct service line. Copper is old and slow technology. What this lousy service meant was our two grandkids could not do remote schooling at the same time, or the system would bog down. Then they would lose connection with their teachers. It also meant that my wife, Karen, and I had to forego meetings and other internet-based things during school hours. . . .

I believe that internet service is the equivalent of what roadways, telephones, water, sewerage, and electricity were for prior generations. Students and businesses that are lacking infrastructure, suffer consequences that lead to unequal outcomes. We must do better.

When I am elected Lt. Governor of PA, I will see that PA publicly funds last-mile installation of fiber optic cable to underserved areas. PA should also reclassify the internet as a Title II communications service. This designation will allow the FCC to protect consumers against abuses by service providers, prevent unfair data caps and shut-offs, ensure network reliability, and affordability. PA should also remove barriers to competition -- including incentivizing public options. The digital divide is real and bridging it is an important step to revitalizing areas on the wrong side of the digital tracks... Read more

No More War in Ukraine 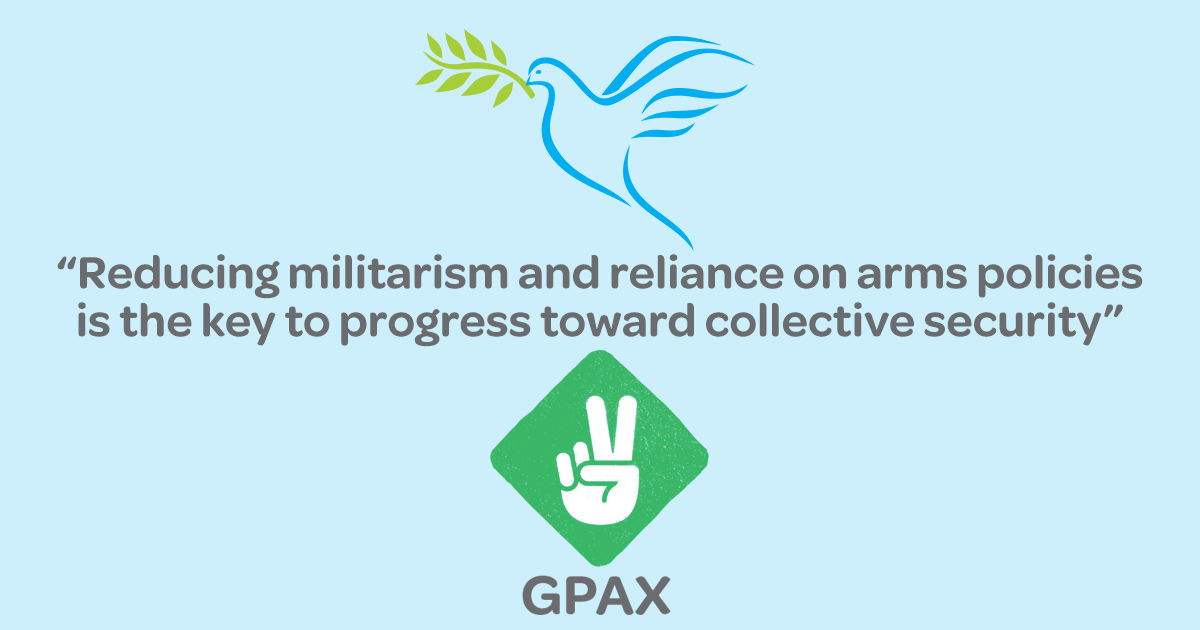 Because the U.S. is fighting a proxy war with Russia in Ukraine, it is important that the Green Party of the U.S. (GPUS) have an official statement regarding its position on the war in Ukraine. It is especially important because of the grave danger of nuclear war in which the government has placed our country and the rest of the world. Because one of the Green Party pillars is Peace, we should have a position that is likely to end the hostilities and resolve the differences between Russia and Ukraine in a peaceful manner.

The GPUS endorse the following statement, on October 10th, 2022, as the official position of GPUS regarding the war in Ukraine:

The GPUS views the war in Ukraine with great concern. As the U.S. party of peace, we emphatically oppose the recourse to war as a means of inter-state dispute resolution and, accordingly, condemn the present violence in Ukraine by all sides. With respect to the U.S. and Western response, we express specific four concerns regarding ...
GPUS calls for cessation of unconditional military aid to Ukraine, lifting of counter-productive sanctions regimes, and initiation of genuine negotiations toward a ceasefire and sustainable peace framework! We implore the Biden Administration to use its position of influence to facilitate peace by encouraging peace talks and engaging with Russia to de-escalate tensions – not to fuel war by further arming Ukraine and prolonging a terrible conflict...Read more

...Compared to other regions of the world, Africa is the least resilient continent to climate change due to a high level of vulnerability and a low level of preparedness. “The African continent is the one with the least impact on climate change, but paradoxically, suffers the majority of the consequences of these scourges,” said Félix Tshisekedi, President of the Democratic Republic of Congo (DRC).

Several African leaders point the finger at the failure of the international community to meet the objectives of COP21 in Paris in 2015. That is to say, to contain, by 2100, global warming well below 2 degrees Celsius compared to pre-industrial levels, ideally limit it to 1.5 degrees. But according to the World Meteorological Organization, the warming could reach 2.5 to 3 degrees... Read more

...There has been a sevenfold increase in the price of natural gas since 2021.  Oslo anticipates a 94 billion euro profit from the petroleum industry this year, up from 65 billion the year before. Green Party Parliamentarian, Rasmus Hansson, concludes that it is “morally wrong” to gain from price rises driven by war.  He further warns that Norway runs the risk of damaging international relations with European states that are struggling to adjust to reduced supply and higher prices.

Hansson states; “we think Norway is being short-sighted and selfish. We are getting a windfall of profit which is very big, but the question is does that money belong to us as the most obvious reason for that price increase and that extra income is the disaster that has befallen the Ukrainian people?”... Read more

...The Australian Capital Territory (ACT) – containing Australia’s capital, Canberra, and surrounding townships – has been awarding businesses for their sustainable choices for over 10 years. This time, charities, hotels, businesses, and embassies were among the winners of the Climate Choices Business Awards. These prizes recognized companies’ contributions to sustainability and climate action. . . .

ACT Greens are the fastest growing political party in the region. Founded in 1992, they are the third force in ACT politics. . . . With three Ministers and three independent members in the government, ACT Greens try to ‘Build a Better Normal.’ They listen to citizens to find solutions to the major challenges of society and the planet... Read more

...Hurricane Fiona swept through the Canadian Maritime provinces in late September, leaving a path of destruction.  Wind gusts were up to 170 km per hour. Roads were washed out. Trees and powerlines were knocked down. Houses were swept out to sea.  The storm surge even altered the coastline of the province of Prince Edward Island (PEI).

With 8 of the 27 seats in the provincial legislature, the Greens of PEI are the official opposition to the governing Conservatives.  The Green Party is critical of the government’s response to Fiona and lack of preparation to deal with future storms that are expected because of climate change. . . .
PEI Green Party leader, Peter Bevan-Baker, describes the government’s response to the devastation caused by Fiona as “frustratingly slow” and questions why it is taking so long to restore power...

Greens also call for better long-term planning as there will be more storms of this magnitude due to climate change. In a 2019 federal summary of climate science, fossil fuel emissions are blamed for the intensity of tropical storms that form in the southern Atlantic and head north to the Canadian coast... Read more