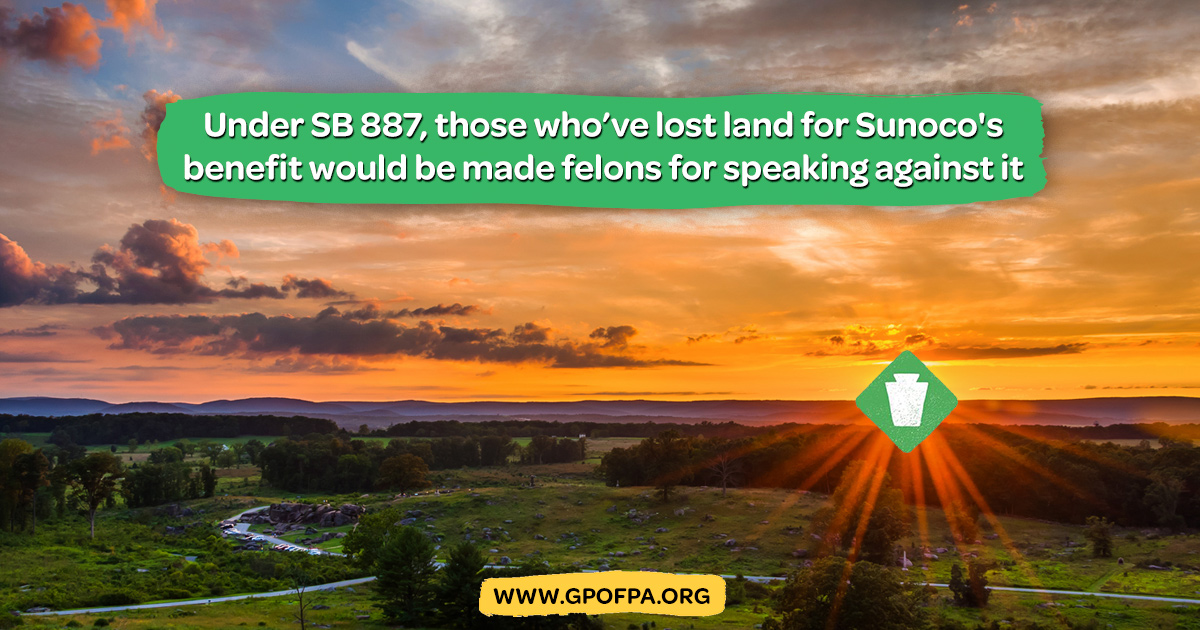 PHILADELPHIA – On November 3, the Green Party of Pennsylvania (GPPA) Steering Committee voted to oppose Senate Bill 887 (SB 887), entitled "Critical Infrastructure Protection Act." The bill was introduced by Senator Mike Regan (R-Cumberland/York) and has been co-sponsored by nine other Republican Senators.

GPPA Co-chair Sheri Miller of Adams County explained, "Recently introduced SB 887 includes a long list of corporations that are already protected by current law. This bill, however, elevates any crimes against these specific corporations to that of a felony offense. The Green Party does not understand what problem the bill is trying to fix."

Smith continued, "The critical infrastructure of our society that needs protecting is our health, our safety and our environment, not a fracking pipeline that carries fossil fuels to Europe to make plastic. This bill's aim is to do just the opposite, to criminalize our right to good health, a clean environment, and a safe community. The fracking pipelines that run through the state of Pennsylvania are threats to the health, safety and environment of Pennsylvania, yet this bill will make it a felony to not only impede or stop their construction, but also to even discuss or strategize ways to stop these pipelines from being built. SB 887 is not only unnecessary and unconstitutional, but also destructive. Why is protesting something that will destroy Pennsylvanian's health, safety, and environment put on par with terrorism? This bill itself is an act of terrorism. It's an attack on our ability to protect the health, safety and environment of Pennsylvania and its citizens. Here in Chester County, water wells have already been poisoned and destroyed by fracking pipelines. I echo the words of former Green Vice Presidential Candidate Winona LaDuke (1996, 2000), 'Someone needs to explain to me why wanting clean drinking water makes you an activist and why proposing to destroy water with chemical warfare doesn't make a corporation a terrorist.'"

"SB 887 is the epitome of corporate donations influencing politicians' actions," said GPPA Secretary Beth Scroggin. "Who defines what constitutes 'critical infrastructure'? Let's be honest. SB 887 targets those who protest against oil and gas infrastructure projects. Since the mass civil disobedience seen in response to the North Dakota Access Pipeline (2016-2017), an effort has been underway to pass legislation to press felony charges on those who would put themselves in opposition of such construction projects. State by state as pipeline projects find public opposition, these bills follow, intending to criminalize protected First Amendment rights. SB 887 goes so far as to penalize individuals for discussing or giving aid or directions leading to a public action. Neighbors may be surveilled by these companies who are intruding in their communities, and felony charges may arrive in their mailboxes if this bill becomes a law."

"What value will SB 887 provide to the Commonwealth and why is it necessary?" asked Chris Robinson, leader of the GPPA Communication Team from Philadelphia. "In many instances, we have not asked for these infrastructure projects, yet they come into our communities. Some projects provide us with no benefit. For example, Sunoco uses the Mariner East pipelines to sell our petrochemical resources oversees. We live with all the risks of those pipelines, however the profits are solely Sunoco's. Under SB 887, those who have had their land commandeered for Sunoco's benefit would be made felons for speaking against it."

The Green Party asks all voters to protect their civil liberties by writing to their PA Senator in opposition to SB 887.