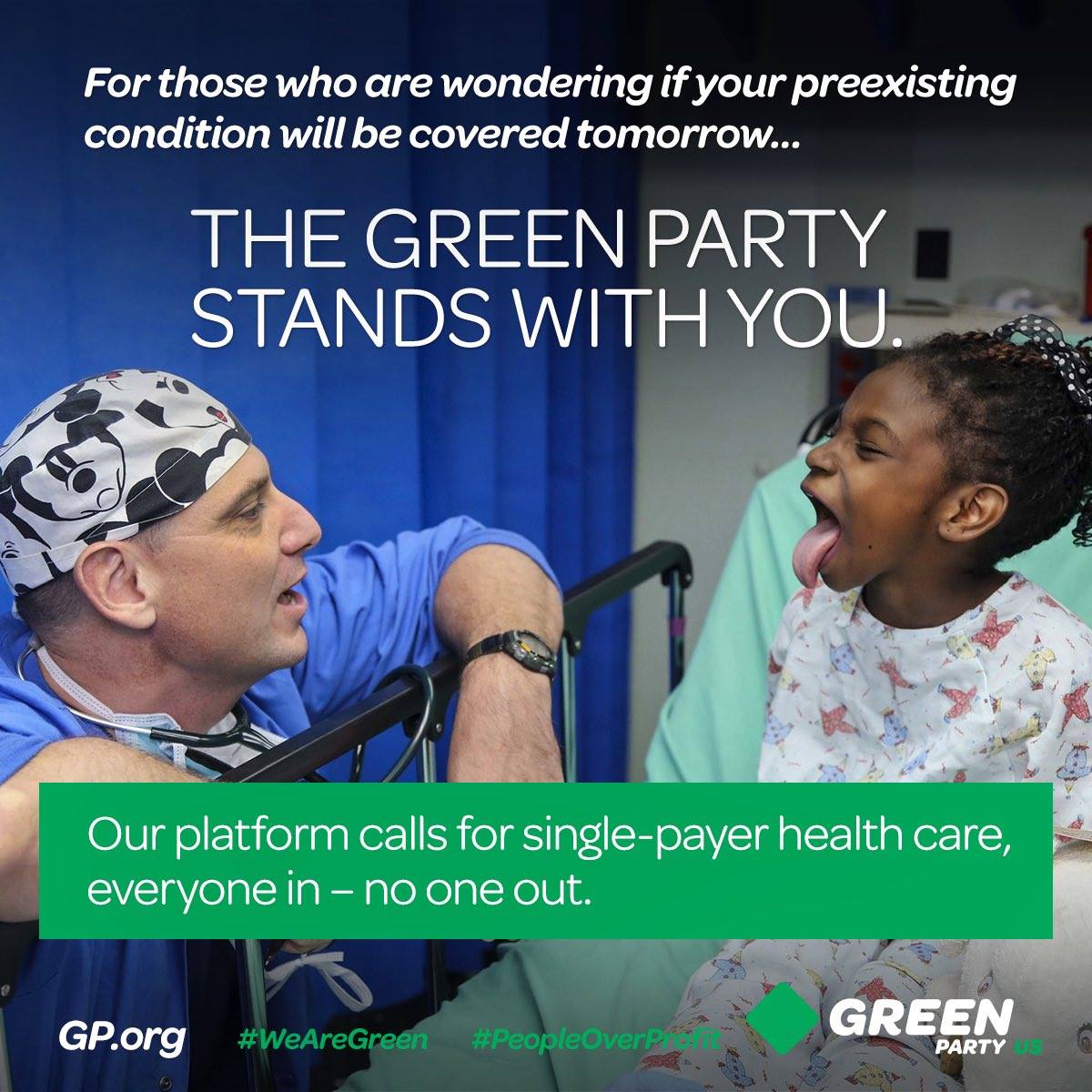 Over the past 20 there is hardly a day that passes in which we don’t see articles, news stories or social media posts regarding healthcare. The power of the for-profit health insurance industry, as well as medical and pharmaceutical lobbies, has diluted and distorted the traditional meaning of many of the terms associated with a healthcare overhaul. Despite this, the Green Party has remained a steadfast supporter of healthcare reform.

Universal Healthcare -- This term originally referred to what we now call “single-payer healthcare.” However, since 2010 the name has referred to making insurance “available and affordable.” Unfortunately, under the Affordable Care Act (Obamacare), it really does no such thing. The options under Obamacare are predominately offered by for-profit insurance companies which are subsidized by the federal government. As a result, this term is usually not included as a stand-alone term for single-payer.

Single-Payer – Single-payer healthcare (sometimes called one payer) is a term used to describe coverage that includes all citizens enrolled in only one insurance plan, and the coverage is full for everyone. Under a single-payer system, whether national or state-based, it would be unlawful for private insurance companies to duplicate the insurance offered by the government. Single-payer provides one comprehensive insurance plan for a state or nation, but the medical system remains private. As such, the only major change to healthcare is who pays the bills, but all other aspects of U.S. healthcare remain the same.

Medicare for All -- This is single-payer insurance at the federal level, quite simply.

Socialized Medicine -- Under this system there is only one national insurance offered, but hospitals and other medical infrastructure are owned by the government. Doctors, nurses, and medical staff are employed by the government. Such systems are common in Europe, but since the 1960s countries have been more inclined to develop single-payer healthcare systems, rather than socialized medicine.

The Green Party of PA (GPPA, www.gpofpa.org) supports Medicare for All as a national approach. That is truly the best single-payer system because it uses the collective power of 350 million Americans to keep the program solvent. However, the continued gridlock at the Congressional level makes Medicare for All unlikely anytime soon. For this reason, GPPA has made PA single-payer a priority issue. This is based on the idea that we are much more likely to have an effect on Harrisburg, PA, than we will on Washington, DC.

Justification for such logic can be found in the issue of cannabis reform. Few ever thought that PA would have a medical cannabis program with a Republican controlled legislature, but we have had such a program for five years. There is currently bi-partisan legislation for complete legalization of adult use cannabis. Single-payer healthcare, like cannabis reform, is an issue that has gotten more popular among the citizenry as people learn about it.

If a single-payer healthcare system was in place in PA all the citizens of our Commonwealth would have complete healthcare coverage, including, but not limited to doctor visits, hospitalization, ambulance, long-term care, rehabilitation and substance abuse treatment, mental health, chiropractic, prescriptions and surgery. People would be covered by virtue of being Pennsylvanians, regardless of age or income.

What would be the cost?

Since the turn of the Century, GPPA has demanded: “Enact single-payer universal healthcare for all Pennsylvanians, state-funded and locally administered with an emphasis on the greatest possible flexibility for doctors and patients, to guarantee healthcare for all, alleviate the medical malpractice insurance crisis and cut costs by focusing on prevention.”

The time could never be more appropriate for healthcare reform. We are in the middle of a deadly pandemic, small businesses are closing, and other businesses -- as well as state, county, and municipal governments -- are more cash-strapped than ever before. We in the Green Party are committed to such reform, which is in direct line with our values of social and economic justice.