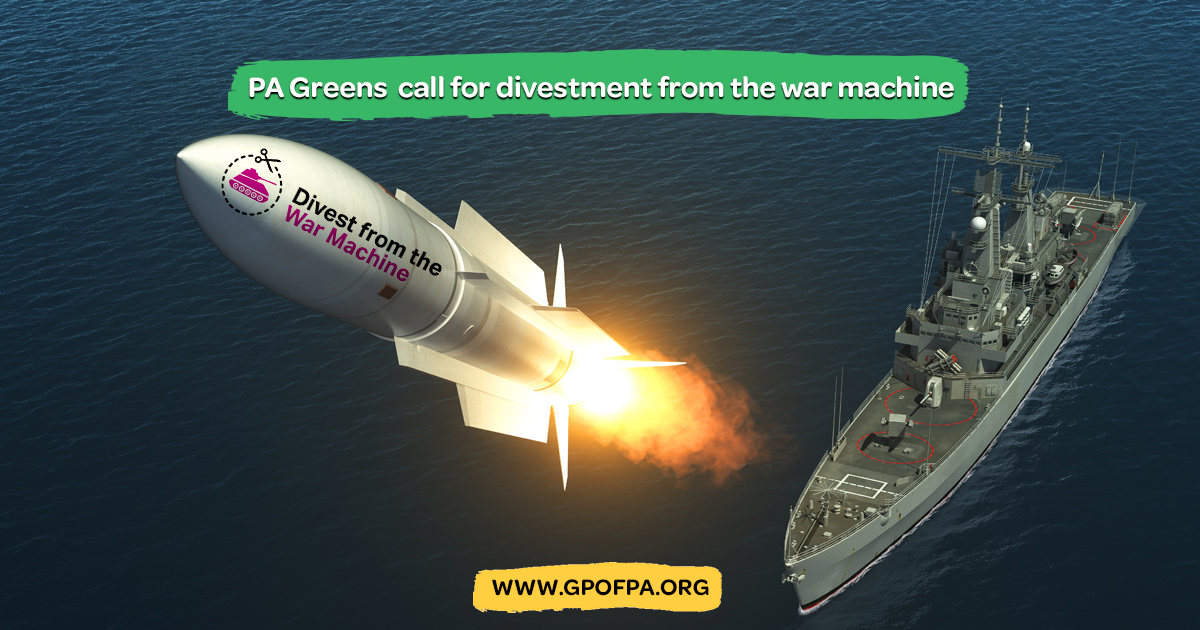 Alan Smith, co-chair of GPPA from Chester County, explained, "A year to the day before he was killed, April 4, 1967, the Reverend Dr. Martin Luther King, Jr. gave his "Beyond Vietnam" speech. On the anniversary of that speech, Code Pink and the Black Alliance for Peace with Ajamu Baraka, 2016 Green Party nominee for vice president, co-sponsored the new coalition, Divest from the War Machine."

"In his speech," continued Smith, "King railed against racism, materialism and militarism calling for a revolution of values. The U.S. is heavily invested in these three things which oil the war machine. War and violence are used to protect the property of the ruling class and perpetuate their interests. The Pentagon budget is $1 trillion. The U.S. is the number one arms trader on the planet. The U.S. has over 1,000 military bases occupying 160 out of the 196 countries. Corporate and financial institutions are heavily invested in racism, materialism and militarism. Democrats and Republicans, including the Trump administration, all support the expansion of the military. A commitment to people, planet and peace is at the heart of the Green Party. We stand against racism, materialism and materialism. We must divest financially, intellectually, culturally, and emotionally from those things that run the war machine. No more oil for the war machine!"

The Divest from the War Machine coalition says, "We are demanding that our universities, religious organizations, individual investors, retirement funds, mutual funds, and other financial institutions stop making a killing on killing."