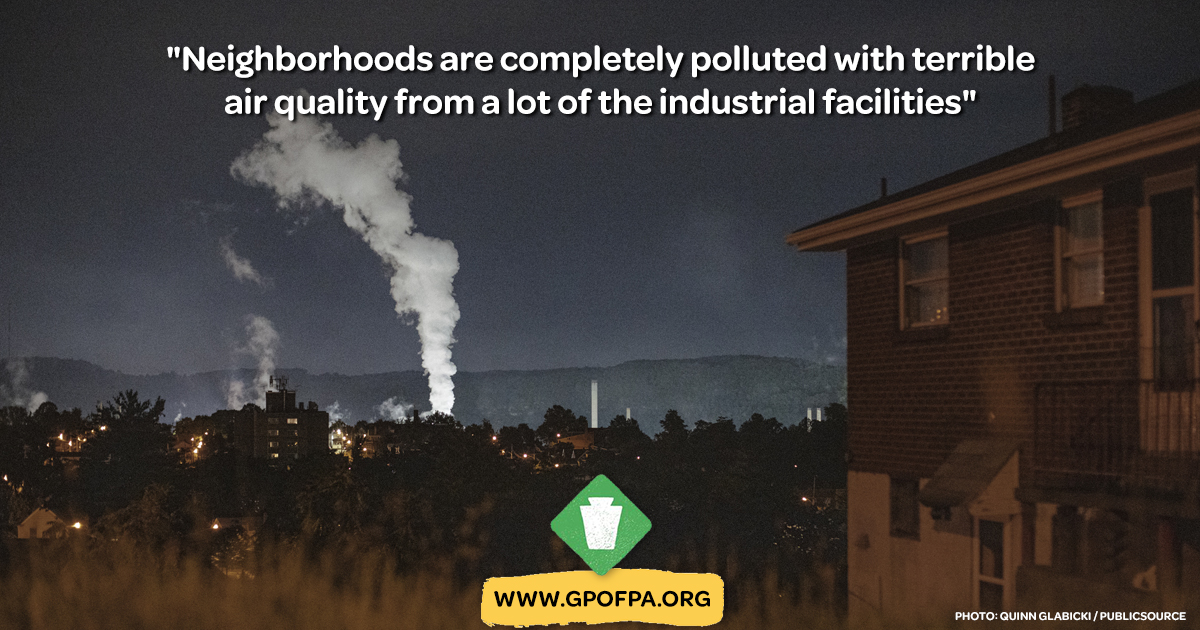 As the Allegheny County Health Department attempts to improve the county's air quality, environmentalists say enough isn't being done and communication between them and the department is lacking.

"While we have made some progress, Allegheny County residents still suffer unhealthy air quality far too often for officials to take a victory lap," Patrick Campbell, the executive director for the Group Against Smog and Pollution, said during the Board of Health meeting last Wednesday.

The rule was officially approved in September by the Board of Health and Allegheny County Council. The 16 facilities had 90 days — until Dec. 26 — to submit their plans that outlined what mitigation strategies they would take on days where the county was under an air quality watch or warning. Although those plans became effective upon their submission, members of the Health Department's air quality team are still reviewing the plans and some of them may require changes, Dr. Bogen said.

But for many residents who tuned into the meeting, this step hasn't been enough.

"The regulations that Allegheny County Health Department has brought forth so far are improvements, but they're just small improvements," Matthew Nemeth [North Hills Coordinator for the Green Party of Allegheny County] told the board during public comment. "We need a lot more."

Mr. Nemeth went on to say that he has recently been apartment hunting and has intentionally avoided certain areas of the county because they are known to have worse air quality than others.

"When I looked up the address and saw that it was in West Mifflin, that immediately set off a red flag in my mind … and I know that those neighborhoods are completely polluted with terrible air quality from a lot of the industrial facilities, most notably Clairton Coke Works," Mr. Nemeth said.

Many of the reports included comments that described the air as smelling like "rotten eggs" or sulfur. The rotten egg smell is caused by an excess of hydrogen sulfide in the air, an issue the Health Department previously has cited U.S. Steel for at the Clairton Coke Works.

Most recently, the Clairton Coke Works facility was fined $5,500 on Dec. 15 for a leak caused by an equipment breakdown that occurred in August, which released an excess of hydrogen sulfide, along with four other types of pollutants.

"The current way that coke ovens are regulated, by allowing a certain percentage of leaking equipment and allowable seconds of visible emissions, is insufficient to protect public health," Jay Ting Walker, an organizer from Clean Air Council [and co-chair of the Green Party of Pennsylvania], said during Wednesday's meeting. "The Allegheny County Health Department must do much more to adequately address the environmental injustices resulting from allowing preventable air pollution that burdens the health of nearby residents."

The Health Department has issued nine violations to U.S. Steel over the past two years, according to the notice of violation sent in December. Health Department spokesperson Chris Togneri said that the department has been "extremely aggressive" with regard to enforcement and legal action. The Liberty air quality monitor, which is about 2 miles from the coke works, is often cited when people refer to air quality issues, but fine particulate pollution has decreased by 32% over the last 10 years at that monitor, which are "some of the largest decreases in fine particulate pollution anywhere in the country," Mr. Togneri said.

"We are extremely proud that last year, every single air quality monitor in Allegheny County met federal air quality standards for fine particulate pollution for the first time since that monitoring began," Mr. Togneri said. "We have made tremendous progress and have met those standards a year ahead of when modeling predicted that we would because of our proactive approach."

Even with the most recent citation, environmental advocates are looking for more information about the enforcement of regulations and the prevention of these issues.

"There's been no communication about what's causing the exceedances or what's being done to stem them," Mr. Campbell said at Wednesday's meeting. Mr. Campbell then asked the board members to "do all that you can to provide more frequent and substantive updates" about what the Health Department is doing to enforce these regulations and reduce air pollution.

"We are not stopping efforts to improve our air quality, and we are not satisfied," Mr. Togneri said. "We also recognize that we cannot do this alone, as we have said continuously. The Health Department will continue to engage elected officials at the local, state and federal level to ensure comprehensive and workable solutions are advanced for improving air quality in the region. "We will continue to recommend and assist in the development of policy solutions to provide additional tools to the department. We will continue to use the tools that we have, exploring new and innovative ideas that can allow the department to go further in addressing air quality and all of the other myriad of issues that they have been charged by state and federal government to address," he said.

Part of the newly enacted Mon Valley Episode Rule requires the Health Department to alert residents when the county is experiencing bad air quality days. The Health Department awarded nine "mini-grants" to community-based organizations to help residents sign up for the Allegheny Alerts system, where they can receive emails, text messages or calls about the Air Quality Action Days — but some think that isn't enough.

Mr. Downing also noted that even though hydrogen sulfide exceedances don't always trigger an Air Quality Action alert, they "can still be dangerous," and the public should be notified.

Emissions from the Clairton Coke Works rise above the City of Clairton on the evening of Sept. 3, 2021. (Photo by Quinn Glabicki / PublicSource)