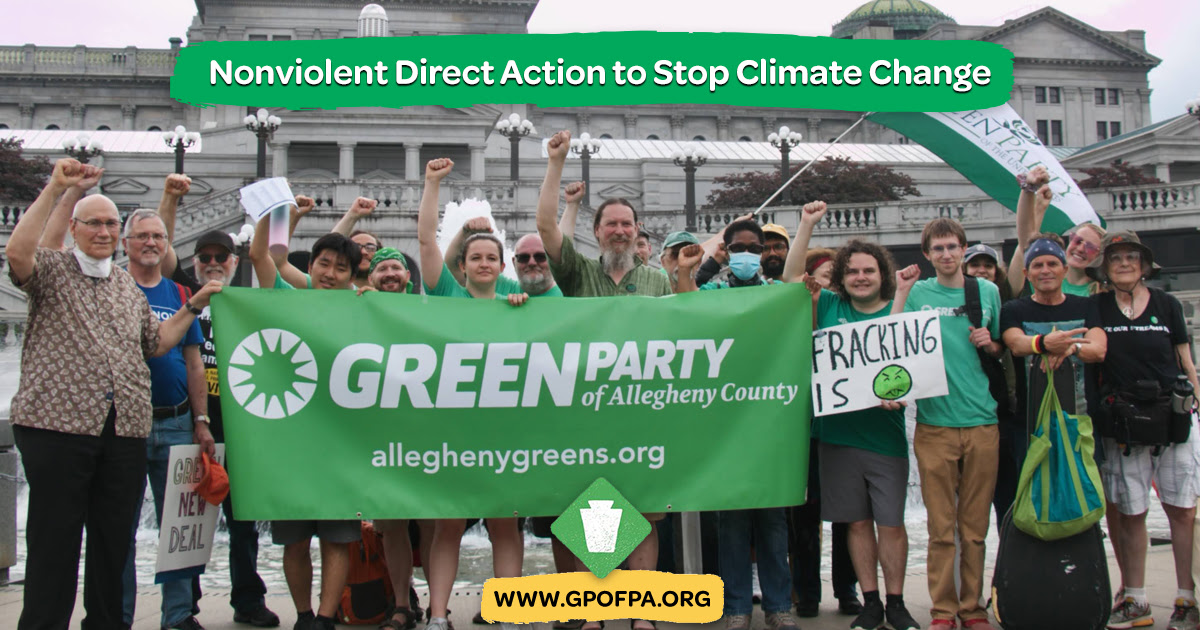 On the weekend of June 11-13, the PA Climate Convergence demonstrated outside the PA Capitol in Harrisburg. Representatives of 77 organizations called for urgent legislative and administrative action on climate. They wanted a path to climate justice which includes the phase out of greenhouse gas production and a just transition to clean, renewable energy for those most affected by the exploitative fossil fuel and petrochemical economy.
On Monday, June 13, demonstrators presented the PA Governor and General Assembly with a petition signed by 6,000 citizens demanding that the government
STOP:

While those concerned citizens were lobbying for their environmental rights, which are guaranteed by the PA Constitution, a smaller group concerned about the environment and government corruption took direct action to impress the PA General Assembly with the need for urgent attention to the climate. Below is the account of one of the ten demonstrators who were arrested because -- rather than hear the truth -- the PA Legislature chose to arrest people.

By Michael Bagdes-Canning, Green Party Candidate for PA Lieutenant Governor
Monday began with training at 10 am, a healthy mix of the principles of nonviolent direct action and rehearsing the scenarios. The first action team headed out at 12:55 pm, followed by the non-arrestable team at 1 pm. The first team headed to the office of Senator Gene Yaw (R-District 23).

Our issue with Yaw was his conflict of interests. Yaw is handsomely paid as a FULL TIME legislator, but more to the point, Yaw is chair of the Senate Environmental Resources and Energy Committee. In that role, he oversees legislation that impacts the oil and gas industry. Unfittingly, Yaw is also a lawyer with a firm in Williamsport which says on its website, “With top-to-bottom knowledge of the energy industry, our attorneys work with the gas companies to advise on all legal aspects of development and operation.” Moreover, Yaw's top ten donors to his campaign include eight oil and gas related entities. Because PA allows gifts to legislators and most of those gifts go unreported, we have no idea how much money Yaw is raking in from the oil and gas industry.

The police recognized members of the first action team, but the team was able to get up to Senator Gene Yaw's office. When the eight of us went inside this office, we were told that the Senator wasn't in, that he was already at work in the Senate. But . . . but . . . but . . . our people on the outside saw him SPRINTING out of the office when he found out we were there to see him. Better still, his staff insisted that outside jobs, campaign contributions, and gifts weren't bribes -- and then they called to have us arrested.
Funny fact: If we had offered to buy those policemen a cup of coffee and if they had accepted, they could have been fired because that is corruption. Yaw, however, can rake in the money, and -- because our corrupt PA legislature says it is legal -- it's not bribery, it's all okay. Everybody got out of police custody within an hour and received summary citations for criminal trespass. These are the equivalent of traffic tickets.

Our second action team left at 2 pm. They planned to leave at 1:05 pm, but the PA House kept going back into recess and caucusing. The team was kept in limbo until the House finally came into session around 4 pm.
As it turned out, the second action had 11 people willing to risk arrest while visiting the House chambers. The plan was to “bribe” the legislators and drop a banner. The money droppers tossed money over the side, but the banner droppers were unable to unfurl the banner because of a very quick police response. One of the banner droppers was Christina “PK” DiGiulio, the Green Party Candidate for PA Governor. The “bribers” rained down $203 of real money ($1 for each PA Representative) which had "BRIBE" or another appropriate message written on it. Their banner read “You Take Bribes, The Planet Dies.” Unfortunately, the Capitol Police ripped the banner out of the teams hands before it fully unfurled. Only two of the 11 were arrested, issued summary citations, and then released fairly quickly, while the police issued a simple warning to the other nine to not come back again within 24 hours.

I would be remiss if I didn't mention that another, allied group acted boldly throughout the weekend. Our spirits were lifted with the fruits of their bold action -- banners were hung from bridges, billboards and fences. They, too, were giving voice to the urgency of the moment and, in the end, many of them joined us for the actions described above. Coupled with the powerful panels, art, marches, projections, and training that made up the PA Climate Convergence, a powerful message was sent.
There are many tools in the activist toolbox. Nonviolent direct action is an essential one. This was a beautiful example of moral-fusion organizing, and together with our allies we brought out 50 people on a Monday to a nonviolent direct action. United under the banner of a new group, Pennsylvanians for Action on Climate (PAC), they promise to come back again and again until our demands for climate action and an end to corruption are met.
We put a spotlight on the intersection of fossil-fueled climate catastrophe and the catastrophic consequences of money corrupting our politics. Participating with us were
We successfully made some very corrupt people think about their corruption, and we also made some of our friends inside the Capitol feel emboldened.
Overall, I believe this was a great success. Well done, everybody!
If you would like to join Michael Bagdes-Canning’s campaign for PA Lt. Governor, please contact [email protected]