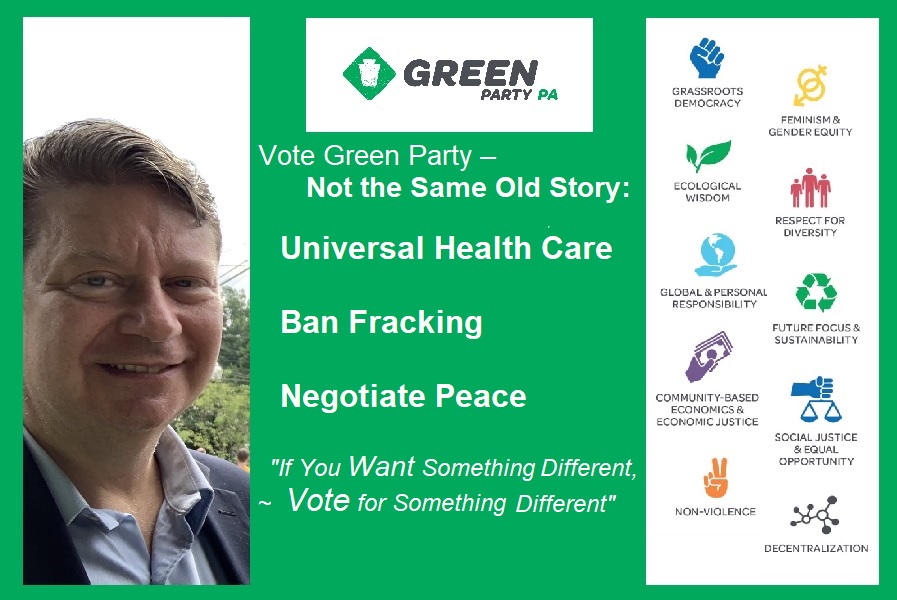 In the November General Election, you will see my name listed as the Green Party Candidate for U.S. Senate from Pennsylvania. This is why you should vote for me.

I believe that fracking is ruining the water and health of Pennsylvania. The latest UN report on climate change predicts heat waves, drought, famine and rising sea levels which the UN Secretary General says “puts us firmly on track towards an unlivable world” and which underscores the need to immediately make all efforts to stop emissions of greenhouse gasses. This can be accomplished through a "just transition" to renewable energy that provides jobs, and does not cause cancer like fracking and burning fossil fuels.

Pennsylvania is at a crossroads. The technology exists today. All we need to do is implement it. Fossil fuels provide fewer jobs, which are temporary, produce more expensive energy, leave behind environmental disasters and cause cancer. Renewable energy provides more and permanent jobs, produces cheaper energy, preserves the environment and doesn't cause cancer. Cancer is a high tax to pay. If you think the fires, droughts and floods we have seen so far around the world are bad, we haven’t seen anything yet from climate change.

As your U.S. Senator, I will work to end fracking and invest in a just transition to renewable energy as soon as possible.

The pandemic shows no sign of slowing down let alone stopping. Recent research shows that 1 in 8 Covid cases (including mild cases) results in lasting symptoms post infection. These Long Covid symptoms may be debilitating and of possibly lifetime duration. In the media we see talk of a labor shortage and claims that people don’t want to work. There is no talk of the millions who are currently unable to work because they are either disabled by Covid or caring for someone who was disabled by Covid. Covid affects all organs and blood vessels, causing problems with kidneys, liver, pancreas, thyroid, brain as well as micro-clots and high blood pressure, which is why we are seeing strokes and heart attacks skyrocketing in all age groups. Post Covid there is increased risk of psychotic disorder, cognitive deficit, dementia, and epilepsy. Covid infects the cells of the pancreas that make insulin, resulting in record new onset diabetes cases. A case of Covid may age cells in the body 10 or 20 years.

Contrary to popular belief, past infection does not provide protection against future infection. In fact, the opposite. Covid weakens the immune system, making reinfection more likely, as well as increasing susceptibility to infections of all kinds and making latent infections active again. This is why we are seeing many infections spreading in addition to Covid, including monkeypox and now polio. Monkeypox spreads the same way as chickenpox. When I was little we did not have a varicella chickenpox vaccine. Everyone (~90%) got chickenpox. We do not want to do this with monkeypox, which has a higher case fatality rate than Covid.

Regardless of your position on vaccine mandates and masks, indoor air quality standards requiring CO2 levels to be maintained below 700 parts per million (ppm) would greatly reduce transmission. CO2 is a marker for the amount of air recently exhaled by others. For reference, a CO2 level of 800 ppm indicates 1% of the air in an indoor space was already exhaled and is being rebreathed. There are also HEPA filters and UV methods that remove or kill viral particles.

Furthermore we could have hours of operation for those who want masking. For instance, the hours of 6:00 am to 12:00 pm could be made mask-only at supermarkets, pharmacies, banks, and other essential services. We could have mask-only buses and mask-optional buses. The same with flights.

I believe we need to negotiate peace in Ukraine, revoke the AUMF, reduce overseas bases to pre-9/11 levels, bring troops home and spend that money at home. Climate change is the greatest national security threat. Engage with China on an equal basis to reduce tensions. Stop funding terrorists and pass the Stop Arming Terrorists Bill proposed by Tulsi Gabbard. Freedom of contract is a fundamental Constitutional right including the right not to purchase, i.e. boycott. Create a Palestinian state. End U.S. support for the war in Yemen. Free Julian Assange, who only reported facts, and prosecute the perpetrators of the war crimes he revealed.

Reproductive rights are in the Green Party platform, https://www.gp.org/social_justice/. My personal position on abortion can be found here:  http://ivoterguide.com/candidate?elecK=778&raceK=11199&canK=56347&

Develop police standards of conduct. Put body cameras at all times on both officers and anyone arrested. All training and equipment should be devoted to taking suspects alive, and a death considered a failure. Our system of justice is based on the principle that it is better to let a guilty person go free than to convict an innocent one. Let us develop a system of policing based on that principle. I would rather take a bullet than shoot an innocent person.

Richard L. Weiss is a native of southwestern Pennsylvania where he grew up working in his family’s bakery business. He has worked as an attorney for the federal government at the U.S. Agency for International Development, and privately overseas. Weiss has worked on financing for the largest geothermal power plant in Indonesia in Sarulla on Sumatra Island. He earned a J.D. at the University of Denver and was a Ford Foundation Fellow in Public International Law at American University in Washington, DC. In addition, he has an M.B.A. from the University of Chicago.

You may volunteer to get Richard L. Weiss on the ballot here, https://www.greenslate2022.com/volunteer.  You may follow Richard’s campaign here, Twitter: @RichardLWeiss.