As President Biden visits Pittsburgh on March 31st to promote his “Build Back Better” campaign, Pittsburgh region organizers, advocates, and activists publicly remember many years of broken promises by leaders and elected officials of the Democratic Party, decades in which the rhetoric of justice and human rights diverged wildly from the bipartisan realities of endless war that devours our resources and has displaced millions of refugees. We remember the bipartisan abandonment of workers and unions in service to corporate donors. We refuse to forget the bipartisan building of the mass incarceration system and enablement of police violence against people of color. We remember that both parties accepted massive campaign contributions from the fossil fuel industry and richly repaid the favors with trillions of dollars of direct subsidies and deregulation    threatening our very future existence as a species.

While Biden promises to reverse the damages of the Trump Administration and “build back better,” thus far we observe deliberate choices that carry forward multiple human rights crises here in the U.S. and internationally, including continued disparate impacts of the COViD pandemic on communities of color, detention and deportation of families and children seeking asylum at our southern border, and draconian sanctions in Iran that are damaging and destroying many thousands of innocent lives. We observe multiple acts of war without congressional approval, continuing a long pattern of diverting resources from critical needs. And we observe Biden's lack of will to support a living wage, Medicare for All, and a Green New Deal that provides living wage union jobs, enacts reparations and environmental justice for black, indigenous, and people of color and ends government enablement of the fossil fuel industry while providing for a just transition for workers.

We demand that Biden keep his key campaign promises to enact a livable minimum wage of at least $15 an hour,  end fossil fuel subsidies, pass the PRO act, and close the detention camps at the border. We demand an end to endless war and imperialist mis-adventures and an end to the deadly sanctions that are killing, starving and denying medical assistance to millions around the world. We demand that our government redirect the people’s wealth, resources and labor to fund the needs of the people. We demand that he ban fracking, provide universal healthcare, and enact a Green New Deal to radically transform our economy by putting power in the hands of the workers and saving our planet from environmental catastrophe in the process. We demand a real Green New Deal, which addresses all of our human needs and rights, including good union jobs, housing, public transit, healthy food, education, health care, racial justice - and our interdependence with our family of all peoples and nations and ecologies of life, with whom we stand in solidarity for the sake of our mutual survival. 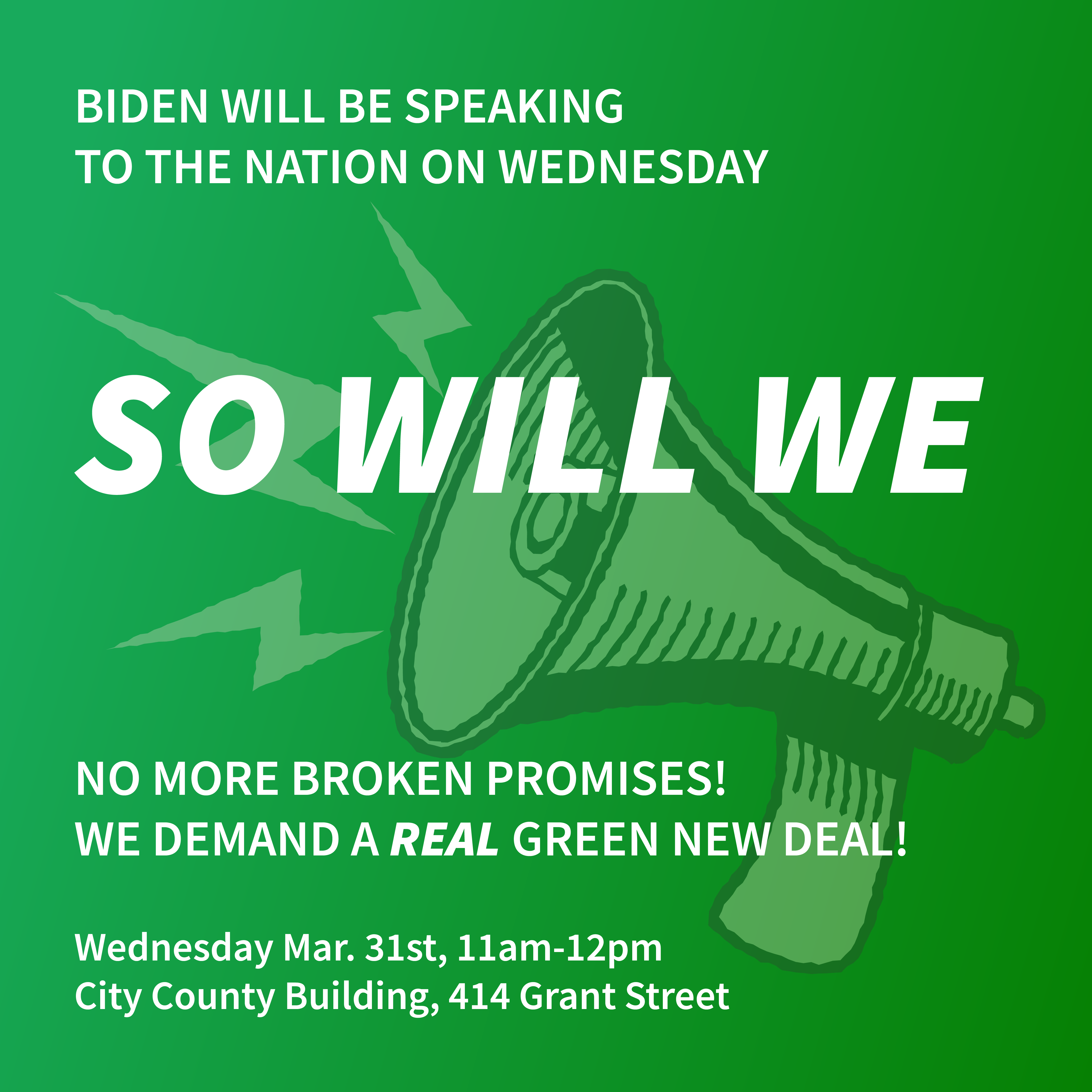