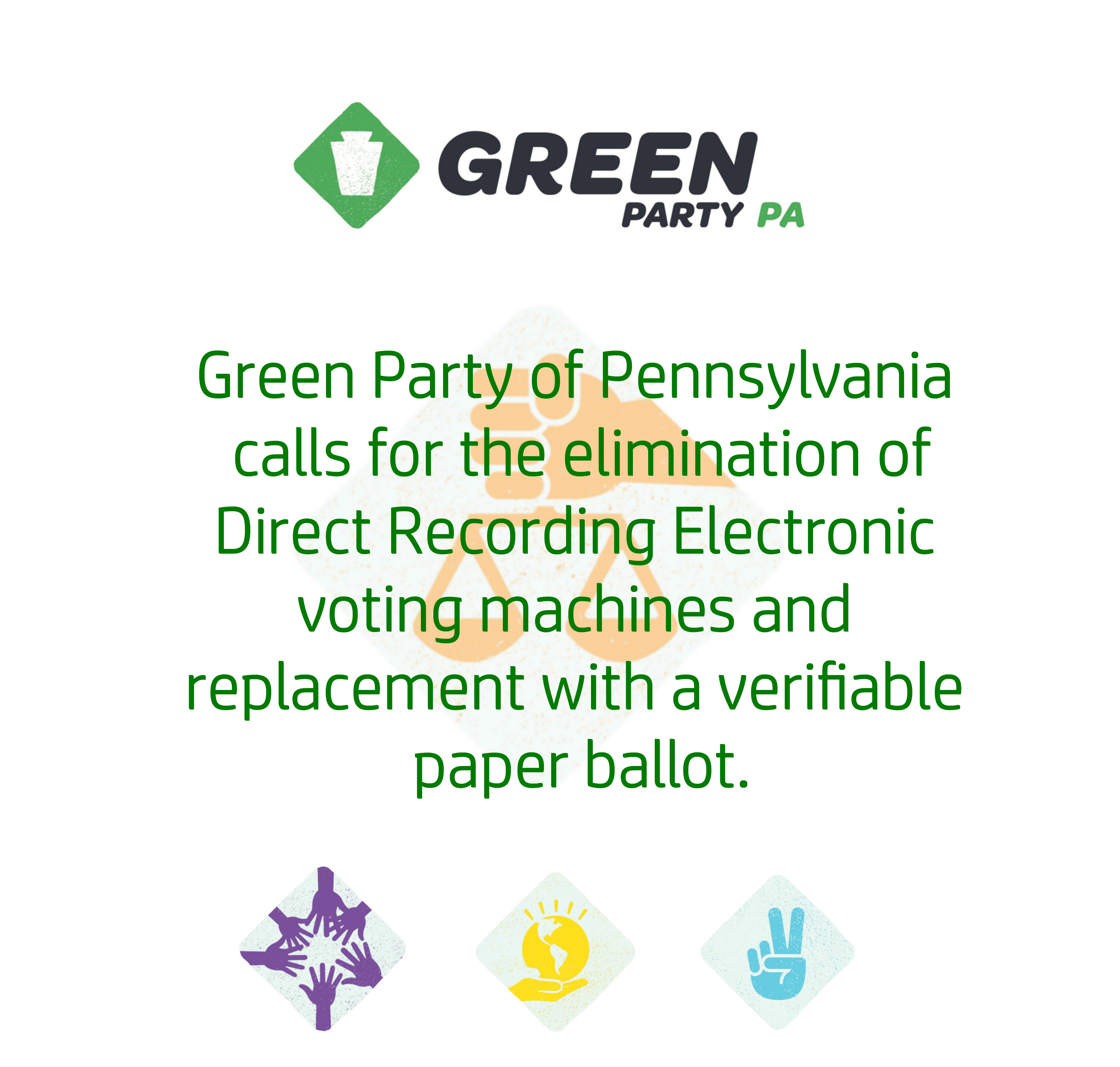 The Green Party of Pennsylvania calls for the elimination of Direct Recording Electronic voting machines and replacement with a verifiable paper ballot.  Paper ballots can be tabulated with an optical scanner.  This system is now used in several Pennsylvania counties.  Random audits can verify the accuracy of the scanners.
The Jill Stein for President campaign recounts have raised some serious issues about the integrity of our elections.  Most notably, 75,000 ballots in Michigan were found to have no choice for president.  These votes were all in Detroit and Flint, yet Michigan law says these votes cannot be counted, and the reported totals stand. In Pennsylvania, the recount sought to examine voting equipment in counties were recounts were conducted, but these attempts were denied by county level judges.  While US District Judge Paul Diamond struck down the recount in Pennsylvania based on the Stein campaign contending unverifiable elections are unconstitutional. So, there is still no assurance of an accurate vote count.
“In Wyoming County, we used to have a paper ballot and a pencil to vote.  We would joke that the only way to improve the system was to use a pen”, said Green Party Auditor General candidate Jay Sweeney.  “The Help America Vote Act was passed and we now have electronic voting machines with no paper trail.”
In addition, the Green Party of Pennsylvania calls for the adoption of Ranked Choice voting.  This will allow voters to rank their choice in order of preference without fear of electing a candidate they oppose.  Maine was the first state in the nation to adopt this system in November.
Hillary Kane, GPPA Secretary, said "This is not the end of the Green Party's efforts around electoral reform.  The Green Party of Pennsylvania has long supported multiple reforms to improve access to the ballot such as Same Day Registration, Instant Runoff Voting, Ranked Choice Voting, and reduced signature requirements for those seeking elected office."  Kane was one of hundreds who filed a petition earlier this month requesting a recount in her precinct in West Philadelphia.
Finally, voter suppression must be reversed.  Long lines made it difficult for the elderly and disabled to tolerate the wait.  Broken machines were found in use in predominantly black voting districts.   Voting on paper ballots allows more people to vote simultaneously rather than wait for one of a limited number of machines to become available.
The Green Party of Pennsylvania thanks Dr. Jill Stein for her presidential campaign, promoting awareness of the Green Party’s values and shining a light on the problems with our voting system.
The Green Party of Pennsylvania is independent political party that stands in opposition to the two corporate parties.  The Green Party of Pennsylvania stands for grassroots democracy, social justice, nonviolence, and ecology.
# # #

Green Pages: The official publication of record of the Green Party of the United States http://gp.org/greenpages-blog