Please note: In order to decrease undesired emails among our supporter's,  we will be limiting future distribution of the Green Star to those who sign up as Green Followers, Supporters, Advocates, or Champions at gpofpa.org/join_us. There is no cost to join as a Green Follower. We don't want to lose any of our readers so be sure you are signed up if you want to keep getting the Green Star!

My great grandfather, James, built a house for our family and white supremacists bombed it. He died from the injuries he suffered. He was Cherokee. His wife's mother was Lumbee, and lived enslaved on a North Carolina plantation. She was raped by the white slave master and birthed the child that would later marry James. Emma Nora and James had 12 children, one of them was my grandfather. I have spent 5 summers living and learning among the Lakota. I share this information to reveal connections. In my Earth Day message back in April I shared a phrase in Lakota. "Mitakuye Oyasin." It means, we are all related/all are my relations.

The dominance of European/Western culture and capitalism has brought alienation, not just alienation from other humans, but separation from all things, the air, the soil, other creatures. The atomization and compartmentalization of life does not allow us to recognize let alone celebrate our interconnectedness. From the leaking Fukushima Nuclear plant to the garbage patch the size of Texas in the ocean, we see deep disconnection. From the 100 companies responsible for 70% of global emissions to the greed of billionaires and multi-millionaires, we see deep disconnection. From the tenacious thirst for energy that our war machine has, to the practices of endless consumption and planned obsolescence, we see deep disconnection.

From October to November Native Americans come face to face with a deep disconnection surrounding their culture and history. During this time period they must endure the celebration of Christopher Columbus a person who sought to exterminate them, mocking costumes and cultural appropriation during Halloween and the lie perpetuated about Thanksgiving (The first "Thanksgiving" celebration was about giving thanks for the slaughter of several hundred Native Americans in Connecticut and the safe return of the colonists without one white settler dying).

To be Green is to celebrate our connectedness. It is to stand in the forest and listen to the trees, it is to stand shoulder to shoulder with the marginalized and oppressed, it is to care for and respect the water, the air, the soil. Sunlight shining through water droplets creates a rainbow. Humans are 70% water. Let's stop drowning and devastating the Earth with the result of our disconnectedness. Let's allow the sunlight to shine through us and create rainbows everywhere we go. Let's be Green!

~More connectedness from the "Three Sisters."

September 14 -- Delegates to the Green Party of PA met for an afternoon conference in Bellefonte, PA. There were 19 delegates from eight counties present, along with nine observers. Following reports from GPPA state officers, organizing teams and national committee people, the delegates discussed plans for a PA Presidential Caucus in April 2020. They were especially interested to learn about the Presidential Caucus’ impact on county Green Parties. The next gathering of GPPA delegates will be a virtual meeting at noon on Sunday, November 17.

September 14 -- The Bucks County Green Party has endorsed and supports Doylestown Climate Strike led by youth in a march to the Bucks County Courthouse, where we will hear youth, adult, and organizational speakers share their personal stories and passionate calls against climate change.(show all) 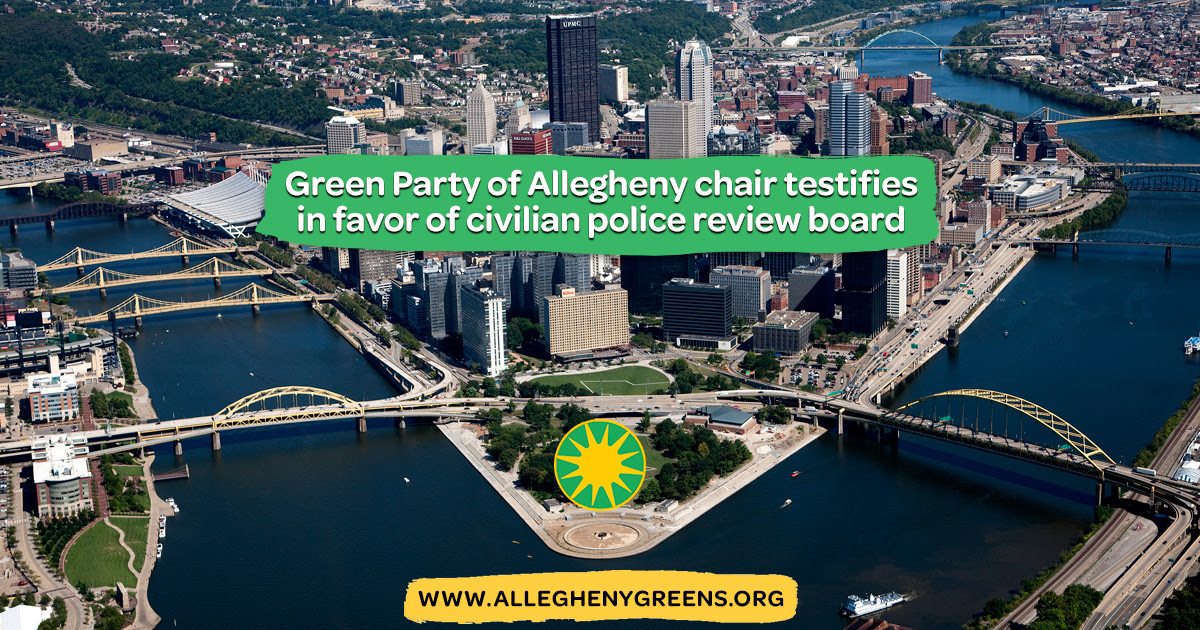 August 29 -- Testimony before Allegheny County Council by Jay Walker, chair of the Green Party of Allegheny County, “I represent the more than 1000 registered Green Party members who reside in this county. Our party endorsed an independent review board last September because it exemplified three out of the four pillars that form the foundation of our party. . . . “ (show all)

August 25 -- The Green Party of PA (GPPA) is seeking exciting candidates to run for state legislature and statewide elected positions in 2020. Individuals need not be currently registered Green to apply. (show all)

Tara Yaney for Edgewood Borough Council
Allegheny County
Tara tells GREEN STAR that she has a BS in physics from the University of Pennsylvania and directs the Pittsburgh Concert Orchestra Junior Wind Ensemble. You might donate to her campaign via her website, For more information visit https://taraforedgewood.com/

Olivia Faison for City Council
Philadelphia
Olivia tells GREEN STAR that she has an advertisement in the September-October issue of What’s Happening Philly Magazine, on page 8. Olivia will have a fundraiser on 10/27. For more information visit https://www.facebook.com/photo.php?fbid=10214738787563180&set=a.2145221749978&type=3&theater

Riley Mahon for School Board
Upper St. Clair Township, Allegheny County
Riley tells GREEN STAR that he has been endorsed by Dario Hunter, a Green Party candidate for nomination to President of the U.S. Visit Riley’s new website For more information https://alleghenygreens.gitlab.io/rileymahon2019/

At Least 62 Greens Running for Office in 2019 Fall Elections

At least 62 Greens are running in elections in September, October and November 2019. At least 43 Greens have run in winter, spring and summer 2019 elections, with 18 elected. Most are running for a variety of positions: city and town councils, soil and water commissions, school boards, township trustees, and zoning boards. A few are seeking seats for state legislature or statewide office. (show all)

NY Greens, unlike other third parties, call for an end to fusion voting ALBANY, NY — Most of the state's minor parties are on red alert as the state considers an end to fusion voting — both the Working Families and Conservative parties have filed lawsuits seeking to block the Public Campaign Financing Commission from even considering the subject. (show all) 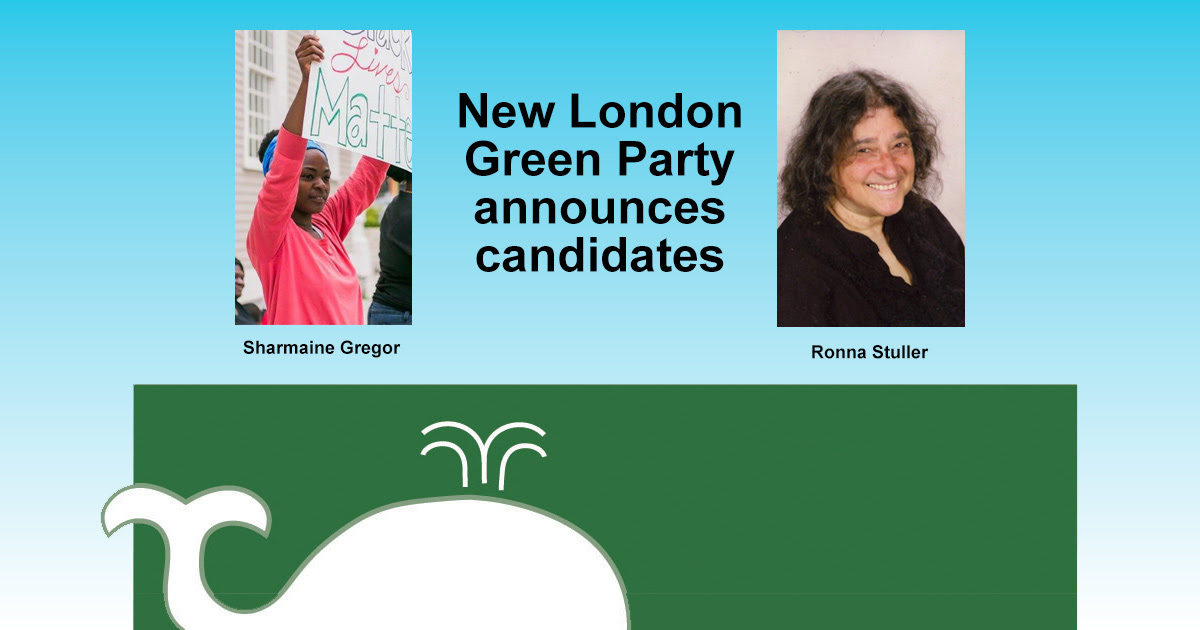 NEW LONDON, CT — The New London Green Party endorsed candidates for City Council and Board of Education. Green Party Chairwoman Ronna Stuller is running for a spot on the council and Sharmaine Gregor for school board. Stuller, co-founder of the Riverside Park Conservancy, served on the school board from 2009 to 2011, is a sitting member of the Planning and Zoning Commission and made an unsuccessful run at a state representative seat in 2016. (show all) 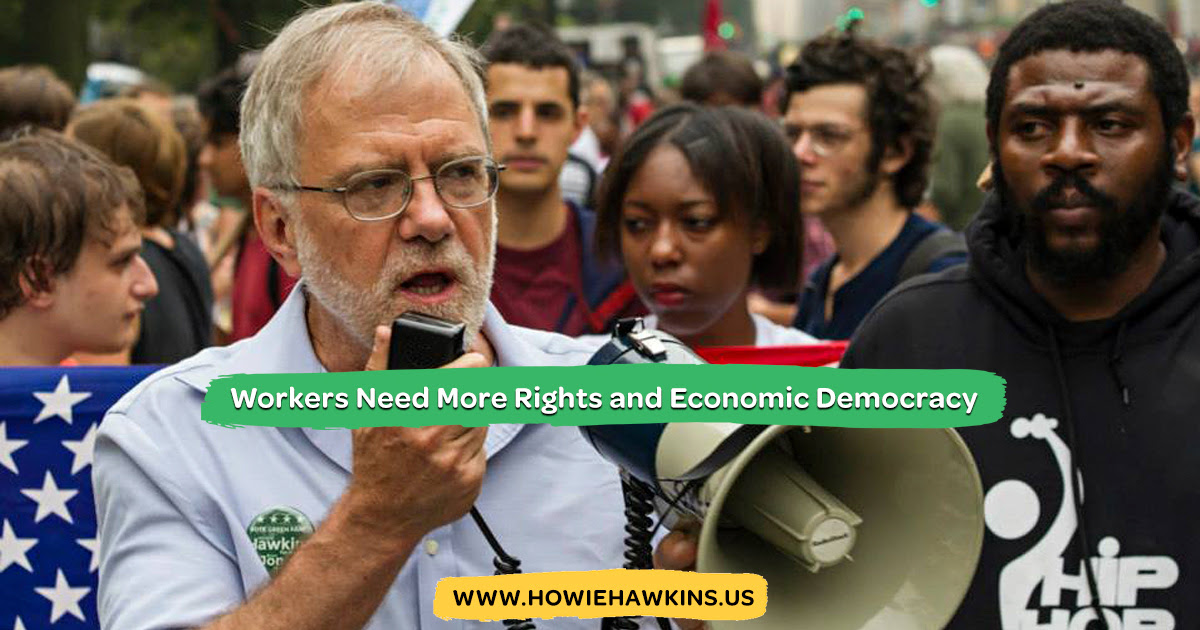 As someone who has been a union member since I was a Marine with the American Servicemen's Union until I retired last year as a Teamster as well as a member of the Industrial Workers of the World, I have lived the reality of mistreatment of workers in the United States. It is good to see labor rising with teacher and other strikes increasing across the country and with the U.S. public showing its highest support for unions in decades. (show all)

FEC Recognition of the Dennis Lambert for President Campaign 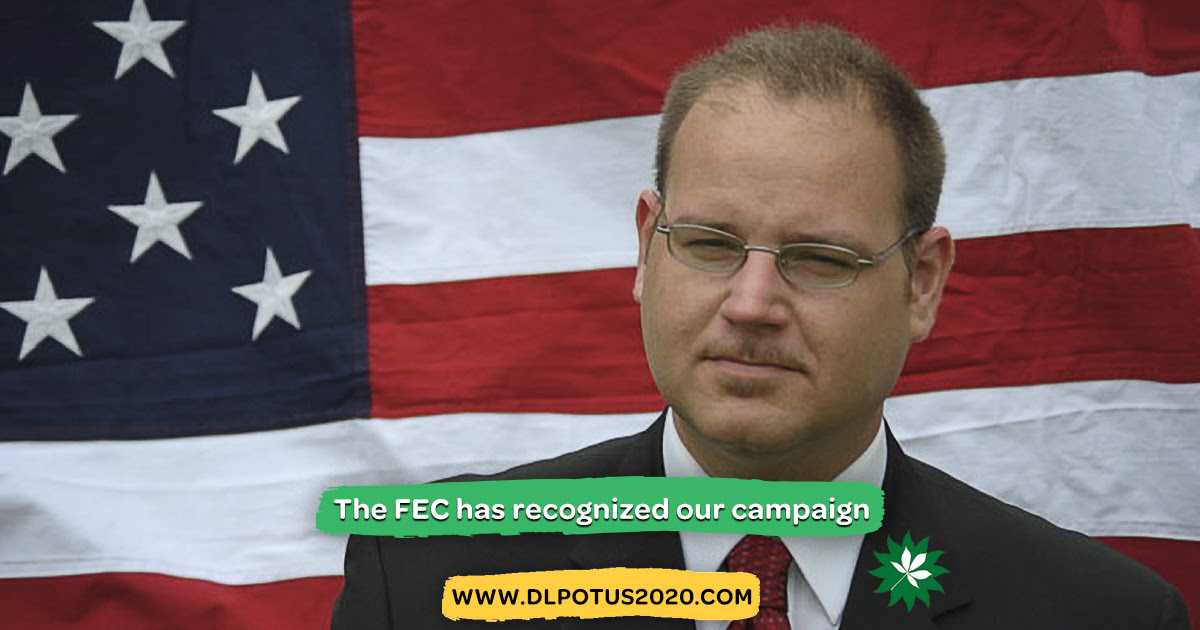 Dennis Lambert for President 2020 is a legal reality. Our new treasurer, Tim Gladeau, will be responsible for making sure we record the donations, and double checking to ensure that none of them come from special interests or PACs. We are a people powered campaign. Starting the bank account and PayPal for donations cost us to run the campaign on a monthly basis. We are also close to printing some of the first campaign material. (show all) 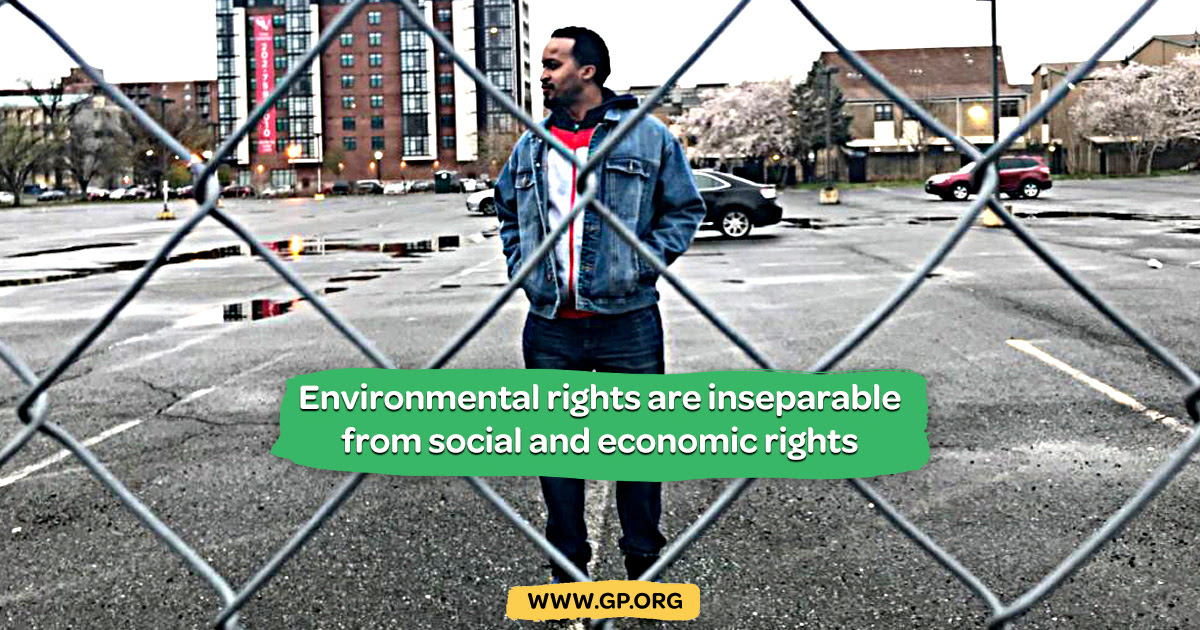 The Green New Deal (GND) first entered U.S. political discourse during Howie Hawkins’ 2010 Green Party campaign for New York Governor. Jill Stein, the Green Party’s candidate for president, later invoked the idea in her 2012 and 2016 campaigns. Implementation of a Green New Deal is now being vigorously discussed at all levels of power. On the international stage, where the deal was first put forward by the United Nations Environment Program in 2009; in Congress, where New York Rep. Alexandria Ocasio-Cortez and others have pushed for its inclusion in a new domestic agenda; and especially at the state and city level, where programs like DC’s recent clean energy legislation already invoke its precepts. (show all)

Greens in Canada believe the voting age should be dropped from eighteen years of age to sixteen years of age, stating that voting earlier is more likely to create a life-time voter. Elizabeth May, Green Party leader, states that the issues will, after all, affect their futures. Elizabeth May is also calling for the formation within the government of a committee specifically to work on the climate crisis and believes that “it’s now or never” to begin the switch to a green economy. While in Bradenburg, Germany, sixteen year olds are not only allowed to vote, this twenty-one year old voted for Greens at sixteen and is now running for office. The Green Party is enjoying a rise in support after the German elections.

Speaking of Canada, in our June 2019 issue we posted an article that predicted that the impressive increase in Green Party votes in Prince Edward Islandraised hopes that these increases will spread to the Canadian federal election taking place October 21, 2019. If you would like to monitor results and comments of those elections HERE is a place to do so.

According to the Global Greens, governments in many countries around the world are preparing for two upcoming meetings that can determine the fate of the Paris Agreement climate commitments. In the meantime, the Green Parties of Korea, Taiwan, and Japan are supporting the Hong Kong Protests; also Green Parties all over the world, including the Green Party of UK backed the Global Climate Strike that took place September 20 -27.

India has a brand new Green Party. In addition to the The Uttarakhand Parivartan Party (UKPP), just formed in September, is The Green Party of India, while the new Green Party of Trinidad and Tobago is already distinguishing itself with calls for 160 new schools and no homework!

GREENS BEING GREENS AROUND THE WORLD

UK Green Party opposes airport expansion plans at the Leeds Bradford Airport stating, “Public money should not be used to fund the pollution of our planet by commercial companies.” The Guardian reports that airlines' CO2 emissions are rising up to 70% faster than predicted.

James Beddome, Manitoba’s Green Party leader makes a very salient point in a debate with other party leaders that “climate change isn’t just one heading in a platform, it’s something that has to be interconnected through everything else that you do.” The Manitoba Green Party is very active, by the way, proposing to axe education property tax, make up funding with a tax hike for corporations and high-income earners in addition to proposals for a sugar tax, free bus rides, and improved child care.

October 7
LAST DAY to Register to Vote in General Election
DOUBLE CHECK TO MAKE SURE YOU ARE STILL REGISTERED!
https://www.pavoterservices.pa.gov/Pages/VoterRegistrationApplication.aspx

Web Conferences are online - RSVP to get connection information.  The locations for in-person conferences are to be determined.  In-person conferences can be hosted by counties, county groups or regions. These events are fundraisers.  When hosted locally, the host group receives back half of the revenue after expenses.  To apply for hosting, submit your info toour Application for Local Hosting of GPPA State Meetings or GPPA-Sponsored Events.  We strive for geographic diversity in reviewing applications, however, all submissions are considered.