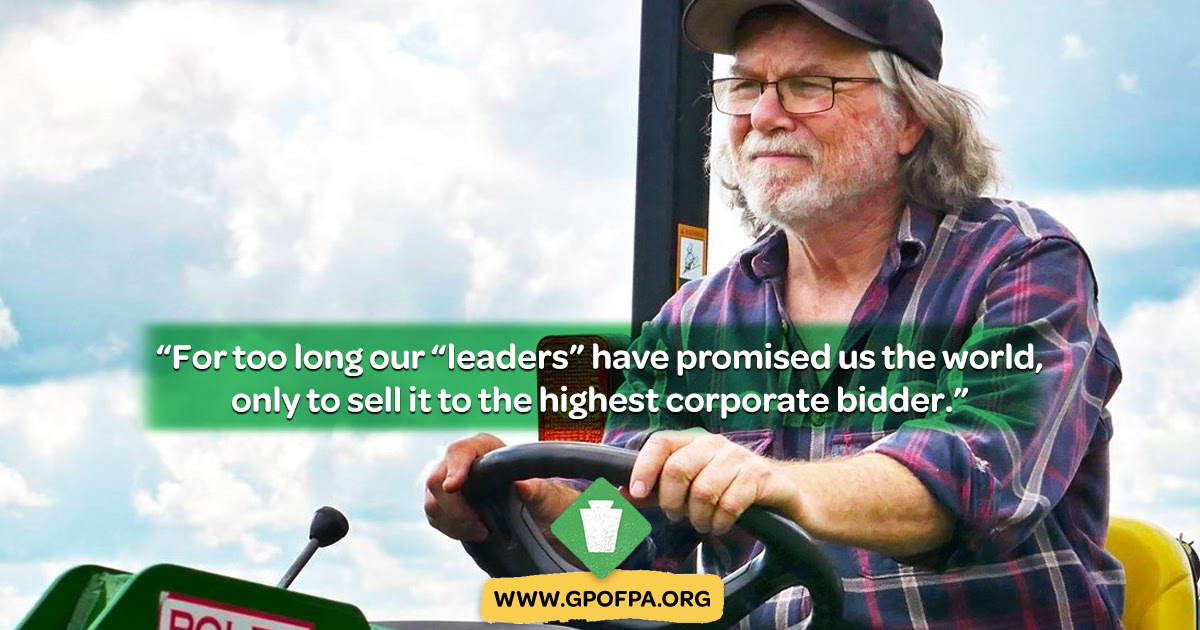 By Michael Bagdes-Canning, Green Party Candidate for PA Lt. Governor
When I received the Green Party of Pennsylvania (GPPA) endorsement to be their candidate for Lieutenant Governor, I spent some time thinking about how my life has changed in the last 40 years and how much I have learned.  When my wife, Karen, and I moved into our homeplace 40 years ago, seven acres were scarred by an active strip mine. The house had suffered from years of neglect. The Butler, PA, economy, too, was in tatters: jobs had been extracted to warmer climes and the exodus of young people had already begun. My parents were beside themselves –  not only did we move into a ramshackle home on an abused piece of land, we moved into a “depressed economy.”
Once upon a time, Butler County, and much of the rest of the U.S., could feed itself. Vegetables, pork, beef, poultry and eggs were all produced on local farms and grown in a sustainable fashion by local farmers. Those were the good old days before industrialization, globalization and ill-conceived farm policy, before forces that encouraged consolidation, over-mechanization, conglomeration, and specialization. Those same forces spelled the end of the small, diversified family farm and the advent of the industrial farmer.

I now see that our legislators decided to favor big farms and to squeeze family farmers. Their choices led to today’s system in which farmers receive just 15 cents of every dollar spent by consumers on food. Many farmers have to get off-farm jobs just to survive, and many more have decided it’s easier to get out of farming or sell the farm. Our current farm policy seems to be designed to prop up the industrial farm and the profit-taking middleman and to drive the little guy out of business. I think this needs to be rethought. Until we can feed ourselves, we can have no homeland security.

The same can be said of our local economies. Towns like Cherry Valley once had thriving local markets. Many people of my generation grew up in homes where a family could function with one income. There were lots of good-paying, family-sustaining jobs. The streets of our cities and towns were lined with local, prosperous businesses. There was never a shortage of folks willing to step up to staff the volunteer fire department or to volunteer at polling places.

Our legislators decided to favor big box stores over local merchants. They gave tax breaks to the superstores and offered them infrastructure they needed to locate outside town. Now, our towns are boarded up, shadows of what they used to be.

A single income is no longer enough to get by, so both parents must now work outside the home, shouldering the dual burden of childcare costs and lost time with their sons and daughters. People don’t have time anymore to volunteer at the fire halls, to serve in government, to work the polls, or engage in mutual friendliness.

I could go on and on. In the almost 40 years that I’ve lived in PA, I’ve watched it hemorrhage jobs and young people. It’s time for that to end. Our communities are fractured; many of us don't even know our neighbors, and fewer of us make decisions based on neighborliness because we don’t have the time. Decisions made by our “leaders” have robbed us of community.

Novelist and environmentalist Wallace Stegner (1909 -- 1993) separated Americans into two camps: Boomers and Stickers. Boomers (and here he was not talking about the generation I am part of) are “those who pillage and run” and want “to make a killing and end up on Easy Street.” Stickers are “motivated by affection, by such a love for place and its life that they want to preserve it and remain in it.” When I reflect on my life in Pennsylvania, this rings true.

Our legislators have empowered Boomers and punished Stickers. Rather than rewarding those who cherish their neighbors and the place they live, they have incentivized extraction of wealth – leaving most Pennsylvanians struggling and places like Cherry Valley neglected, impoverished, and shrinking.

For too long our “leaders” have promised us the world, only to sell it to the highest corporate bidder. The corruption of our politicians has been the millstone around the neck of our once thriving working class communities. The jobs we have lost are gone, but the grit and love of place are still here. We Stickers are anxious to build back what is lost.

I can now see that we have the best government money can buy!

In PA, it is COMPLETELY legal for paid lobbyists to “gift” (bribe) our elected representatives with anything: vacations, sports tickets, and -- of course -- endless wining and dining, EVERY SINGLE NIGHT WHEN THE LEGISLATURE IS IN SESSION in Harrisburg. Is it any wonder legislators are more responsive to lobbyists than to constituents?

In PA, there are NO limits on the amount of money that a person or entity can give to legislative campaigns. A single person can give tens or even hundreds of thousands of dollars to a single candidate.

In PA, legislators are reimbursed for their meals and housing while in Harrisburg, but do not have to turn in receipts. It’s called the “per diem.” Anywhere from $177 to $200 per day! Many of them pocket their “per diem” and then dine with lobbyists to avoid spending a cent on food. Some politicians use their campaign accounts as personal slush funds maintained by a steady flow of donations from shady lobbyists.

In fact, some legislators, like Senator Gene Yaw (R-District 23), have outside jobs. This, despite the fact they are paid as full-time legislators with all the perks. And some of those legislators, like Senator Yaw, have jobs that look like gross conflicts of interest. Yaw works for the McCormick Law Firm, which does a fair amount of work with the oil and gas industry, while he chairs the Senate Environmental Resources and Energy Committee which writes laws that directly impact the oil and gas industry.

The lobbyists in Harrisburg, and there is ONE OIL AND GAS LOBBYIST FOR EVERY LEGISLATOR, do not feed and donate to our officials out of the kindness of their heart. They expect something in return.

When elected Lt. Governor in November, with my running mate Christina “PKA” DiGiulio as PA Governor, we will fight for poor and working people. Our sole focus will be on bringing good-paying, family-sustaining jobs back to PA. Instead of looking to bring back 20th century jobs in dying industries, we will push for 21st century jobs that will not leave. The skilled craftspeople that used to work in those dying industries will be employed to manufacture and install solar panels. Our underemployed building trade workers will be employed retrofitting our housing stock, making them less leaky and more self-sufficient.

Pie in the sky? No! It’s a change of priority. Instead of enriching Wall Street, it’s time to invest in Main St. It’s time to empower Stickers and to boot the Boomers. We can create a new generation of high-quality jobs by investing in a Green New Deal that restores the damage done by extractive Boomer industry and prepares our home for the future. It would also provide for an economy where our young people can stay and raise their families.

I believe PA can be a place where every person can live a dignified life: where every person who is able to work can work, where every person can comfortably afford the basic provisions they need to survive, and where we exist harmoniously with the land we live and rely on.
If you would like to join Michael Bagdes-Canning’s campaign for PA Lt. Governor, please contact 724-431-8560 and [email protected].
https://www.gp.org/paofgp_candidate_on_boomers_stickers
Do you like this post?
Tweet