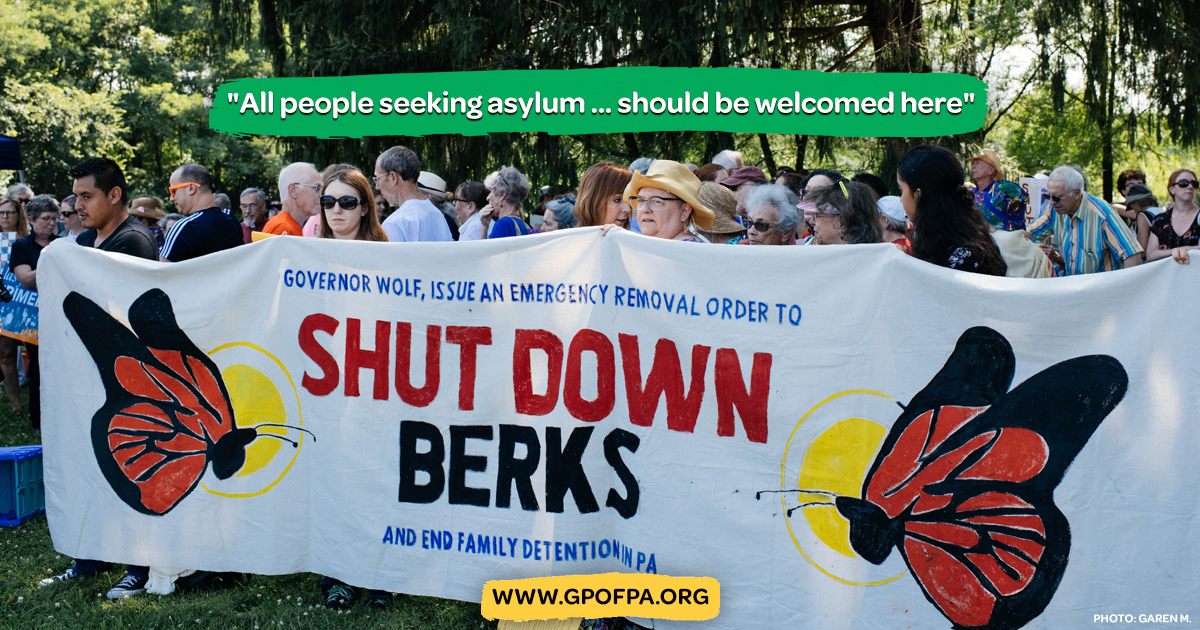 The Green Party of Pennsylvania (GPPA) Steering Committee has urged the closing of the Family Detention Center in Berks County, PA, where immigrants have been imprisoned for the last five years. To accomplish this closing, GPPA has joined the PA Immigration and Citizenship Coalition.

"The Green Party will break the deadlock created by the two corporate parties," said GPPA Co-chair Sheri Miller from Adams County. "Undocumented immigrants and their families, who are residing in the U.S., should be granted legal status with a chance to become U.S. citizens. All citizens of Canada and Mexico should have permanent border passes, and immigration for work should be decriminalized.

"All people seeking asylum from political, racial, religious or other forms of repression should be welcomed here," continued Miller. "The arbitrary denial of asylum claims must be ended, and our country should begin to support the United Nation resettlement within the U.S. of those now forced to live in refugee camps."

The Campaign to Shut Down Berks says, "The continued incarceration of these immigrant families . . . is a disgrace and a stain on our Commonwealth. However, this stain could be erased by the PA Department of Human Services (PA DHS) and Governor Tom Wolf, who have the power to shut the doors of [the Berks Detention Center] and pressure ICE to release these families. Unfortunately, neither PA DHS nor Governor Wolf have [been] shown to have the political will to fully pursue all means available for releasing these families and shutting the center down."

"The idea of using prison/internment as a short-term response to problems is wrong," insisted GPPA Co-chair Alan Smith of Chester County. "Caging people and using a militarized response to social problems are immoral, deeply flawed and exacerbate the problems. They are rooted in retribution, punishment and demonization."

"The Green Party," continued Smith, "stands for restorative and humane ways to address problems, such as demilitarizing the border and removing walls and prisons. The Green Party stands for restorative approaches like the Real Green New Deal, which advocates for living wages (including a $20 minimum wage) for all workers, regardless of their citizenship status. Putting people, planet and peace over profit is central to Earth's survival. The Berks Detention Center does just the opposite. Shut it down!"

Bucks County Green Party Chair Jenny Isaacs spoke of her experience at Berks Detention Center, "In my capacity as volunteer director of a local immigrant rights group, I visited a Doylestown resident and her 3-year-old son after they were apprehended by ICE in my community and subsequently detained at Berks in 2017. I have seen with my own eyes the confinement of small children with their parents, even though these families could easily be released to pursue their legal cases. Many members of my group were shocked to learn that Berks has been housing immigrant families since 2014; they were unaware that family detention and mass deportation as tools of immigration enforcement did not originate with the Trump administration."

Olivia Faison, Green Party candidate for Philadelphia City Council, exclaimed, "The Berks prison is inhumane! No civilized society could keep families in jail because they came here for a better life! Our country used to be a beacon of hope, but now it keeps the most vulnerable among us behind bars. I stand with the Green Party in calling for 'social justice for all those living in this country regardless of their immigration status.'"

"Mass migration of citizens of the Earth is being caused by multinational corporations," explained Chris Robinson, a Green Party delegate from Philadelphia. "Their wars for resources and their quest for profits drive down living standards around the globe. The Green Party has a plan to correct this situation over both the long and short terms. Eventually, our goal is a world where each person may choose to live and to work in any country without discrimination."

Jenny Isaacs continued, "Citizens of Pennsylvania have an unusually powerful opportunity to take a stand against the use of family detention by insisting that Governor Wolf use his legal authority to #ShutDownBerks immediately, especially since Lt. Gov. John Fetterman has joined in calling for it to be closed. I hope all Greens will contact Governor Wolf to let him know where we stand." Please contact Governor Tom Wolf at 717-787-2500 and govcorrespcrm@pa.gov.