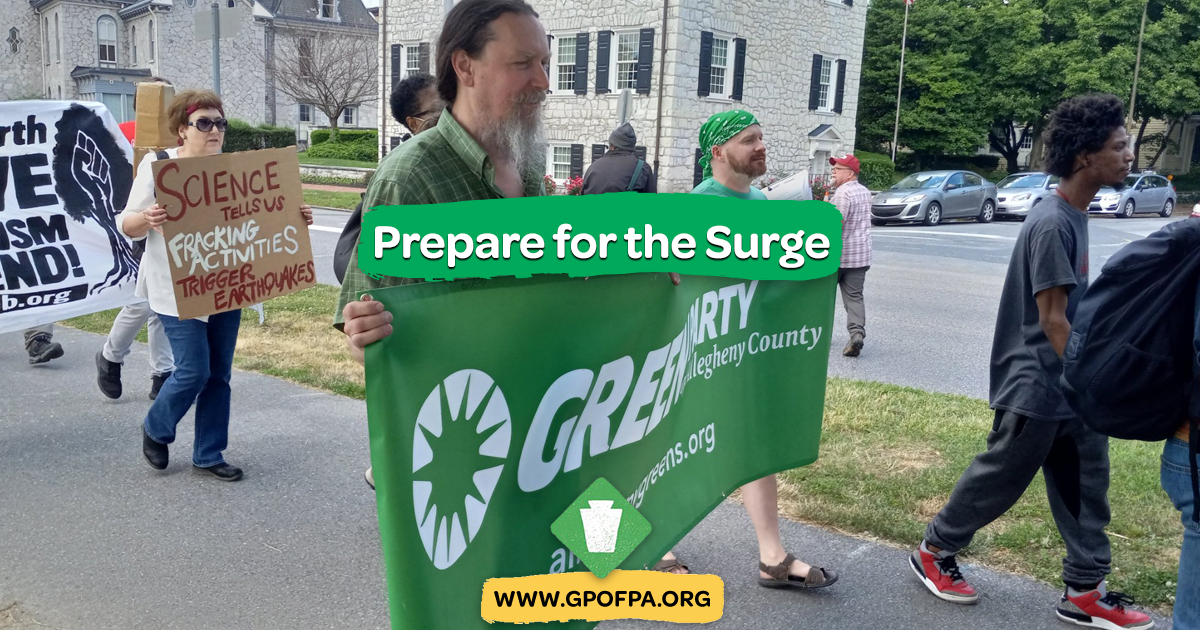 The Green Party of Pennsylvania (GPPA) held its state-wide delegates meeting on September 10 in Belefonte, PA. There were 25 delegates and visitors participating live and almost as many via Zoom. The Keynote Address was given by Howie Hawkins, the Green Party candidate for President of the U.S. (2020) and candidate for Governor of New York (2022, 2018, 2014 and 2010).

GPPA Co-Chair Jay Walker asked me to come here and to talk about whatever I think will rally the Green Party of PA. So, I will give you some suggestions for party organizing and then about policy.

My Main Point: Don’t be Discouraged.

Still, it is our job to rebuild the Green Party membership and to build the vote for our candidates.

Fill the Vacuum on the Left.

Republicans are not just a conservative party. They have become an extremist, far-right, racist and authoritarian party -- a fascist party. The Democrats are a party of the corporate establishment with a program of neoliberal austerity at home and economic and militaristic imperialism abroad. Progressive Democrats make their party look better than it is, but they have little power.

Democrats don’t fight the fascists. They adapt to them. Biden is still seeking bipartisanship with the party that tried -- and is still trying -- to overthrow his 2020 election. The Democrats failed with their top issue, the For the People Act (HR 1), for voting rights. It wasn’t a priority for the Democrats. Biden and Schumer never made lifting the filibuster a priority or a public issue. The Washington Post kept score. There were about 10 Democratic Senators who really didn’t want to change the filibuster. So they gave the Republicans a veto. That’s not how to fight fascists.

Meanwhile, we know from public opinion polling that Green Party positions are 60%+ majority positions: Medicare for All; Green New Deal; Tax the Rich; Raise the Minimum Wage; and Tuition-free Public College. Sooner or later, there will be a surge of support for our policies and candidates.

Organize to Take in the Surge.

So we have to be organized and ready to take in people when that surge comes. That means our local and state parties need to be well-organized and well-resourced so we can respond to people who come to us. We need to expand our base beyond the usual suspects who respond to our Facebook events.

Our county locals should be canvassing year round. Deep canvassing, not drive-by election canvassing. Deep canvassing, or relational organizing, where we talk with people one-on-one, usually on doorsteps (but also tabling or street corner leafleting) where we listen instead of preach.

We have found this to be the most persuasive form of political communication. First, we build relationships and trust, and then we can debate policy. Don’t despair if it seems we are small. Build the organization capacity so we are ready when mass movements arise.

Hawkins went on to answer questions and to discuss policy like fair ballot access, proportional representation, ecosocialist green new deal, economic bill of rights, and the war in Ukraine.