Sex and Public Policy at Green Night Out | GPOP 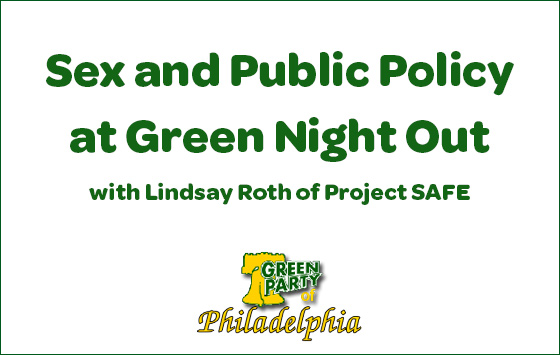 Lindsay Roth and Kelly Sebetka spoke with members and friends of the Green Party of Philadelphia (GPOP) at Green Night Out on March 12. Discussing "Sex and Public Policy," Roth told her audience, "Legislators in Harrisburg design new bills without consulting the people who will be affected, especially sex workers."

Roth is executive director of Project SAFE, an all-volunteer organization providing advocacy and support for women working in street economies, including sex workers. Sebetka is a volunteer with Project SAFE.

Roth and Sebetka also discussed a bill under consideration in Harrisburg. Senate Bill (SB) 851, also known as, 'Safe Harbor' legislation, according to Roth, "needs a lot of work before it will actually serve the interests of young people. We worry that poorly written legislation, like this, will blur the line between the criminal justice and social service systems. Law enforcement officers are not trained to provide services to youth. This legislation should require that youth survivors of the sex trade be included in the training of law enforcement officers."

"At-risk youth should be formally included in the development of this legislation," said Sebetka, "to protect the priorities of those most impacted. There should also be a non-discrimination clause that will insure LGBTQ youth not only have access to critical services," Sebetka continued, " but also that those services are safe, welcoming, and tailored to meet the needs of all youth."

Green Night Out is a quarterly Green Party gathering which is open to the public. Green Night Out is held at Su Xing House, in center-city Philadelphia. The diners discuss politics while they enjoyed a Chinese feast.

The Green Party is an independent political party founded on the four pillars of nonviolence, grassroots democracy, ecological wisdom and social justice. For information about the next Green Night Out, please telephone 215-843-4256 or email [email protected]

Chris Robinson has been a member of the Green Party of Philadelphia City Committee since 2011. He can be reached at 215-843-4256 and [email protected]