Three PA Greens on the Ballot for General Election, November 5 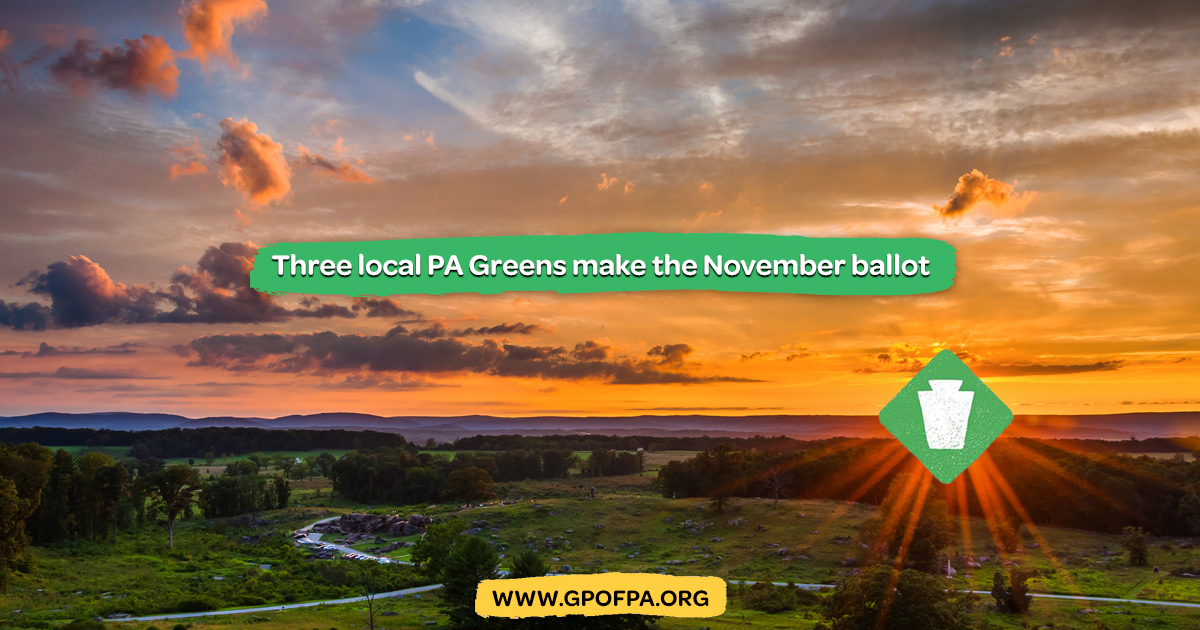 
PHILADELPHIA – Nomination papers for three Green Party of Pennsylvania candidates have been filed. None of those candidates were challenged, and they will be listed on the ballot for the General Election, November 5. The three candidates are Nicholas Prete, running for Methacton School Board in Montgomery County; Riley Mahon, running for Upper Saint Clair School Board in Allegheny County; and Charles Michael (Mike) Farley, running for Latimore Township Supervisor in Adams County.
When asked why he is running for school board, Nick Prete responded, "I'm running for school board because it's time for a change. As a recent graduate, I'm the only candidate positioned to recognize the effect the board's actions have on students, teachers, and all of us. I know what it's like when the board privatizes busing, misleads their constituents, and doesn't listen. I'll be an advocate for recorded committee meetings, I'll promote ecology, I'll hold community town halls listening to the issues we all care about, and I'll be open and transparent with taxpayers. I want to get up every day and help create a better future. Methacton took a chance on me as a new kid six years ago -- and now I'm asking them to take a chance on me and vote November 5."

Mike Farley stated he is running for township supervisor because "I believe in the Green Party's 10 Key Values that no other party properly represents. We have been subject to a two party system for too long -- dominated by two parties that don't represent the interests of 99% of the population."
Riley Mahon stated he is running for school board because "there is an epidemic that is not being addressed. That epidemic is students' poor mental health. I believe that by pushing the start times back and by teaching students healthy coping skills, we can begin to address this situation."
This ensures that the people in three Pennsylvania localities will have an opportunity to vote for candidates who will promote public policy based on the four pillars of the Green Party: grassroots democracy, social justice, nonviolence, and ecological wisdom.Thanks go to these candidates and to their many dedicated volunteers for bringing Green Party values to Pennsylvania politics.

Co-chair Sheri Miller of the Green Party of Pennsylvania (GPPA) said, "I'm pleased that the hard work of these three candidates has paid off. I'm also grateful for the efforts of those Green candidates who did not succeed in collecting enough signatures to meet the onerous requirements for ballot access for anyone running outside of the establishment parties. Their efforts paved the way for future races. Now our candidates need support. If you believe that we need new voices and more choices in politics at all levels, then be sure to follow and share their campaigns on social media, volunteer directly to help their campaigns, or donate when you can."

The Green Party of Pennsylvania (GPPA) is an independent political party that stands in opposition to the two corporate parties. GPPA candidates promote public policy based on the Green Party four pillars: grassroots democracy, nonviolence, ecological wisdom, and social justice/equal opportunity.
For further information about GPPA, please visit www.gpofpa.org. Follow GPPA on social media: Facebook and Twitter
Do you like this post?
Tweet